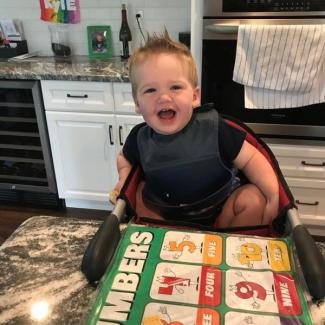 There is certainly no shortage of love for Ryan in our house. He’s a child that most parents would dream to have. He sleeps like a rock, eats like a champ, and, not to mention, is cute as can be. His big blue eyes will captivate you and his laugh will melt your heart. He’s happy, pretty much all the time, and his toothy smile can make you forget the fact that we’re still living in the midst of a pandemic. I can’t ask for anything more. But after looking back to some of my newsletters of yesteryear, I realized that some of the biggest milestones in Ryan’s life have come and gone without much discussion (at least when compared to Kyle’s), which is a shame as it is incredibly exciting to watch him grow.

Kyle has set the bar so high in literally every regard, it is nearly impossible for Ryan to outdo him. Except, maybe, in sheer size. Despite his strikingly cute looks, Ryan is big. So big, in fact, that our pediatrician literally laughed when he saw him for his one-year appointment. To put it into context, he was about 4 pounds heavier than Kyle at 1 year old. Now that may sound like much, heck, I’ve eaten more than four pounds of meat over dinner, but in child-size proportions, he outweighs him by over 15%. In a full sized adult, that’s the equivalent of walking around with 2-3 bowling balls strapped to your waist.

But as my mother would say, ‘he’s perfect.’ And he is. He has a lot to say and is babbling like crazy, although we can’t quite figure out what he is saying. He cracks himself up though, so he must be quite a character. As he gets more animated, its amazing to watch him and Kyle interact. As each day goes by, its clear that they have a special bond. He responds to Kyle in ways that he won’t to anyone else, and is fascinated by his every move. And Kyle, the ham that he is, eats it up.

Now that Ryan is mobile, which he has been for a few months now (he walked right after his first birthday), he is giving Kyle a run for his money. He’s not as quick as Kyle, yet, but will be soon. He’ll chase him around the island, down the driveway or around the yard. They play together, quite rough at times, as brothers do. Despite his age disadvantage, Ryan’s size makes him a formidable opponent when him and Kyle decide to wrestle – which they do, a lot. He’ll throw his weight down on Kyle and will pretty much force him to tap out. It’s quite a sight.

Ryan’s coordination is coming together quickly, and it is amazing to watch him figure out how to do things. He recently taught himself how to open doors, which is more problematic than it is fun. Privacy has gone out the window and Ryan will just show up, even if you are in the shower or bathroom. He’s also figured out how to open our cabinets, and, of course, wants to get into the trash can. It seems that every day is a new adventure, which makes me realize how much I already forgot from when Kyle was this age, only a short two years ago.

If having a second child has taught me anything, it is (que the proverbial cliché) how quickly time flies. The fact that he is already one blows my mind, and I just want to hit the pause button every once and a while and take it all in. There is such a limited amount of time left where Ryan will come stumbling toward me as I walk in the door, hands up in the air, smiling and laughing the whole way, only to throw himself in my arms before I can even take off my coat. As much as I’ll miss these times, I’m even more excited to see what Ryan has in store for us in the future.