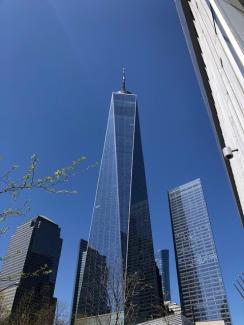 Cathy and I regularly would go into the city. Well, COVID changed that for the last 2 plus years. Recently, we ventured back to NYC for a glorious weekend. Most times we would take the train into Grand Central, especially if we were staying in mid or uptown. This trip we stayed all the way downtown in the Financial District, right on Wall Street, so we decided we would drive, and it worked out wonderfully. There were no worries about catching the right train and schlepping luggage from the parking garage onto the train. We did not have to deal with a lengthy and expensive cab ride from Grand Central to our hotel (and back of course) and schlepping the luggage once again. We pulled up right in front of the Hotel, checked in and parked in the adjacent parking garage. Piece of cake. There was more traffic coming into the city than on the way home. Going in it took about two hours and 15 minutes and it was an hour and 45 minutes door to door coming home. Like I said, piece of cake.

We were spontaneous and planned our trip around the weather. When we saw the upcoming forecast was sunny and temperatures in the upper 60’s, Cathy jumped on the internet and found us a nice room for a couple of nights at the Hyatt on Wall Street. The location was perfect because we were near the South Street Seaport, The World Trade Center and Battery Park. Our day driving in, by time we checked into the hotel, parked the car, and dropped off our luggage, it was around 12:30, just in time for lunch. We strolled down to the Seaport area and had lunch at The Fulton House with a direct view of the Brooklyn Bridge. We settled in, had a glass of wine, and just enjoyed the view and were relishing the fact that we were finally back to NYC. The city was alive, people were everywhere enjoying a picture-perfect day. After lunch, we made our way to the World Trade Center site, which is always a moving experience, regardless of how often you visit the area. We made our way to the southern tip of Manhattan. The area has been revitalized with a French theme, called Le District. There were various restaurants, all with fabulous views over the water to the New Jersey skyline. There was a tulip garden that was unbelievable and had to snap a picture for all to enjoy. We sat in the garden and people watched for hours. Of course, we had a glass of wine to be sure we stayed hydrated. All that people watching made us hungry, so we ventured to Eataly in the Oculus. The Oculus in NYC is an artistic landmark located within walking distance of the World Trade Center. The transit hub, cost four billion dollars, making it the most expensive train stop in the world. With its sleek and modern design, it immediately became an attraction in Lower Manhattan. Our restaurant in Eataly (Eat & Italy), transformed us back to memories of when we were in Italy. Eataly Downtown offers a variety of restaurants, food and beverage counters, bakery, retail items, and a free, hands-on cooking school, all under one roof.

The next day, feeling adventurous, we rented bicycles (CitiBike) right in front of our hotel. An ingenious concept of bike racks all over the city where you can take a bike from one rack and ride as long as you like and to wherever you like and then place the bike back into a designated rack wherever you desire. The entire rental process occurs thru an Ap on your phone, linked to your credit. Once we figured out the process, it was time to ride. Well ride we did. We went from the South Street Seaport along the Promenade on the water, through Battery Park with a view of the Statue of Liberty, along the Hudson River up to Chelsea Market. The views were amazing and there were people everywhere. We rode about ten miles before we “docked’ our bikes in a rack. It was time for lunch and a crab cake sandwich in Chelsea Market did the trick. After lunch, we walked along the High Line Canal Trail before we wandered into the Meat Packing district and relaxed for a moment with a cocktail at one of the outside cafes along the way. Walking through the neighborhoods was so cool. We were talking to one woman outside her building, and she was telling us that Julia Roberts owned the penthouse in her building at one point. Interesting. We made our way through Washington Square Park and ended up at our restaurant on Spring Street (recommended to us by our daughter Kelly). Again, a fabulous dinner ending with tiramisu for dessert, made tableside. We made our way back to the hotel after an invigorating day in the city. In addition to the biking, we walked about ten miles as well. We covered allot of ground that day.

Getting away is always fun but sleeping in your own bed upon our return is comforting. Looking forward to going back to NYC.
Yes, we were sore and yes, we took Ibuprofen.