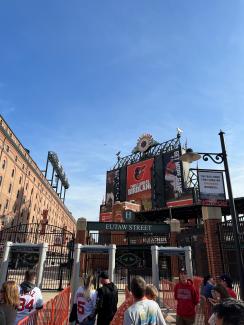 Not long ago, I was having a conversation with a friend of mine, our conversation shifted from work and to family to travel and places we want go and have been (as conversations with both Paul and I so often do). As our conversation went on, we started talking about baseball parks we want to see. Camden Yards, home of the Baltimore Orioles in Baltimore Maryland came up as a place to go. After that conversation, I started my research. Many websites and people I talked to said the same things: don’t drift too far from the stadium as it can get dangerous, make sure to get seafood and enjoy the bars and restaurants nearby.

Rachel and I looked at the Red Sox schedule and saw that they were heading to Camden on my birthday weekend so we said, “Let’s do it!” Another thing Rachel and I wanted to do this year was to attend a Nascar race as I make sure to watch every Sunday and Rachel has never been. Luckily for us, they were racing in Dover, Delaware, which is less than 2 hours away from Baltimore. A small weekend, birthday getaway that was planned for many weeks could not have been any better.

The ball game was at 7 and we arrived in Baltimore around 1, giving us ample time to park, check into our hotel, explore and eat. One of the first things you’ll notice is how clean the surrounding area of the ballpark is. Like many cities, Baltimore loves their professional sports teams. Camden Yards is one of the most impressive ballparks in professional baseball. It feels old with its brickwork and yet modern with its conveniences, a great combination in my opinion. The street, which is closed to street traffic, called Eutaw Street is open to fans with game tickets to roam. There are restaurants, bars, activities, and even brass baseballs embedded into the sidewalk marking the spot where home runs cleared the right field fence and landed on Eutaw Street. There is even a brass ball located about 20 feet high on the warehouse behind the street where Ken Griffey Jr. hit a ball during the homerun derby, 465 feet away from home plate! Inside the stadium is even more spectacular with infinite food and drink options, clean seats, and a beautiful, well-kept ballpark. Baltimore doesn’t get a lot of fans at their games for their games, causing their ticket prices to fall which gave me the opportunity to sit a couple rows back from home plate to watch my Red Sox. While they ended up losing 2-1, it was a great game.

The next morning, we ate breakfast in our hotel and headed about 2 hours east to Dover, Delaware. Attached to the racetrack is a hotel and casino so our first couple hours were spent walking around the casino, going into shops, and grabbing lunch. We met up with friends of ours that we’re also attending the race and headed in! While the track is only a mile long (they call it the monster mile), it is huge! and of course our seats were on the opposite end of where we parked but after the food we ate in Baltimore, the steps wouldn’t hurt us. Unfortunately, the race ended after just 70 laps (of 400) due to rain, but it was the most eventful, loud, and entertaining half hour I have ever been a part of.

While this weekend was for my birthday, there are definitely more Red Sox games, new ballparks and Nascar races in my future. Getting out to see these things after almost 2 years of staying home is a blessing and appreciated more than I ever thought I would. Onto my next adventure!