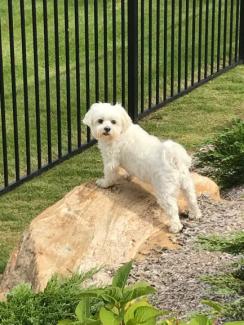 Buddy may be a Maltese that only weighs 14 pounds, but at times he acts like he is a 100-pound large guard dog. When we were designing the fencing, landscaping, patio and pool areas around our house, we made certain that there was ample space that was fenced in so Buddy would be free to roam but still be protected. When I say protected, I mean so he could not run off as well as preventing other animals from coming in. This has worked very well, and the setup allows him to just be a dog and do what dogs do. He can only go so far and is always in view. We can sit outside and do not have to have him on a leash or a runner line and he can wander around and explore, sniff and do his business. He also loves going for walks around the neighborhood and expanding his horizons with new scents to smell, sites to see and interaction with whatever we come across. He gets so excited when we get his harness and leash because he gets to go outside the fence and is a little more free-wheeling. As much as he loves going for those walks, I believe he does love his yard and that is where he is most comfortable.

Buddy is also very territorial about HIS yard and he is always on high alert protecting his domain. He goes on patrol, pacing along the fence, keeping a watchful eye for any potential intruders. He will bark at the birds and chase the squirrels and chipmunks that he will never catch. As quick as he can be, they are always quicker, but he will never stop trying because he wants to let them know who is the boss. There are times when Buddy will be lying on the patio and seems to be taking a nap. He will then be off like a bolt of lightening to fend off some unwanted wildlife. There are times he gets all agitated and marches up and down the patio for what appears to be no apparent reason and we have no idea what he thought he heard or saw. Buddy also patrols and watches for people that he may see that may be no where near the yard but appear in his vision through the fencing. Like most dogs, he will bark at any stranger anywhere near the property to ward them off. One side of our yard has a five-foot high white vinyl fence. When he sees someone walking their dog, he runs to the beginning of that fence and starts sniffing at the bottom of the fence. Usually the dog on the other side is doing the same thing. Buddy then walks and sniffs along the entire length of the bottom of fence until he reaches the end and the other dog, on the other side, usually mimics his actions. It is comical to watch.

There have been times at night when we have been inside and could smell that pungent odor of a skunk that was outside. This drives Buddy crazy and he runs to the door for us to let him out, so he can take care of the situation. Of course, we know better and would only be asking for trouble to put Buddy against a skunk. He would not care about what could happen when dealing with that animal because he would be protecting his turf from that smelly creature. I could not imagine having to deal with him getting sprayed by a skunk. I am sure some of you have had to deal with the tomato juice bath for your dog after a skunk encounter gone bad. Imagine, our white Buddy in a bath of red tomato juice!

So, if you ever walk by our house, be certain that you are under the watchful eye of our dog Buddy. He will certainly let you know that his there protecting his domain.