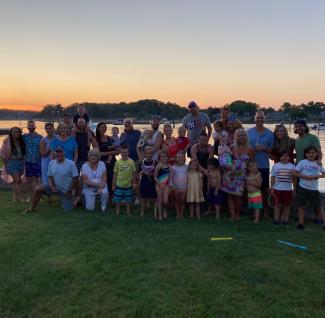 A Couple of Firsts

While it is exciting to hear your child say their first word or see them take their first steps, nothing compares to the feeling you get in the moment you see a child in sheer amazement after doing something new for the first time. It is truly one of the greatest joys of being a parent. Watching their brain try to wrap their head around something they had only seen on TV or in a book is almost comical. If they were a cartoon smoke would be coming out of their ears. This summer there have been several firsts for our children, where every day seems to bring its own adventure, but a couple of notable ones stand out as more memorable than the others.

Ryan’s second birthday (June 28) kicked off the 4th of July holiday festivities, as we hosted what turned out to be about 40 people at my parent’s house for the Branford fireworks. The town put on quite the display – likely making up for the lack of fireworks through the COVID years – and we had the best seats in the house with a front row view as they lit them off over Branford point. I kept telling Ryan that they were all for him on his special birthday – and he loved them. Leading up to the night, there was a bit of anxiety as to how the kids would handle the sights, and more importantly sounds, of the fireworks. Kyle had only seen fireworks once when he was 1 ½ years old and Ryan had never seen them. Given our proximity to where they were being shot off from, you can really feel the percussion of the explosions as well as see them up close and personal. For a child, this could be either terrifying or wildly entertaining. After a day of swimming and sunshine, we were prepared for the worst, but fortunately, the kids loved it! Ryan sat on my lap the whole time, pointing to the sky, and saying “boom!” followed by tons of laughter and smiles.

Kyle was up next, and during a rare spat of rain through early July, I was finally able to deliver on a promise I had made to Kyle weeks ago and we went to the movies for the first time. I can’t stomach the thought of wasting a beautiful sunny day inside, so I kept kicking the can until the forecast was looking less favorable. That day finally came, and we went to the movies on opening day to see Minions: Rise of Gru. For those less in tune with the animated movie world, it features the yellow minions that you’ve undoubtedly seen in commercials, on billboards or at the store. Fortunately, this was right up my ally and Kyle was equally excited. We did it right the first time, too. Our seats were in the XD theater (kind of like IMAX), complete with loveseat recliners. And you can’t go to the movies without stocking upon treats – buttered popcorn, M&Ms, the works. His eyes nearly popped out of his head when he saw how large the screen was, and immediately asked me about 1,000 questions. Much like many of us, he disliked the concept of the previews as he was ready for the feature to start. It was awesome, and he talked about it for weeks afterwards.

There will be countless more moments like this, of course. Right now, were in the midst of learning how to swim, ride a bike and write, all of which pose their own challenges. Either way, every day is a new adventure.