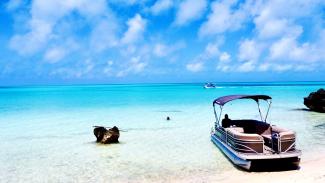 The discussions over the years talking about going on a cruise finally became a reality. Cruising is a great way to travel, you unpack once, you’re able to see a variety of places and getting there is just as much fun as being there. While sometimes seeing a variety of places during the span of a week, a couple of weeks or even a couple of months is great, it was nice being docked in one spot for multiple days and being able to explore as we please without having the worry of being the people who take a photo of our ship sailing away without us. A couple of weeks ago, I talked about covid and the impact it had on the travel industry as a whole and prefaced cruisin’ to Bermuda after a long overdue vacation.

We sailed from Bayonne, New Jersey, right next to the statue of Liberty on Sunday. After an extremely easy boarding process with proof of negative tests, vaccination status, passport, and luggage checks, we were on the ship within 15 minutes of arriving at the port. It has been years since my last cruise, but I remember feeling overwhelmed with how large the ship is. The first thing we had to do was meet at our assigned muster station for an overview on safety procedures. After a couple minutes doing that, we explored the ship, grabbed a drink, a bite to eat and before we knew it, the ship was off! The first half hour was a ride around the statue of liberty, where we were able to get some great photos off the side of the ship. After a couple of hours, we were able to head to our room to unpack. Unbeknownst to us, we were upgraded from an “ocean view” room on the 2nd floor, which has a circular window, to a balcony room on the 7th floor, so we gathered our belongings with the help of the stewardess and were off to our new and improved room. The balcony was incredibly amazing, we spent hours on our balcony whether it was eating breakfast, playing cards, or just enjoying the sounds of the sea.

We were now at sea for the next 2 and a half days before arriving in Bermuda on Wednesday morning. We scheduled our dinner time for 5:30 every night and had 1 specialty dining reservation for our last night at Sea. The next two and a half days were filled with relaxing time by the pool, unlimited food, desert and cocktails, comedy shows, magic shows, music shows, trivia, and so much more. We made an effort to attend every show offered, sometimes even twice as the casts, musicians, and comedians are incredibly talented.

When we woke up Wednesday morning, the ship was docked in Bermuda, and we had no plans other than to explore the Island. We ended up taking a taxi to one of their main beaches, Horseshoe Bay. Horseshoe Bay beach is known for their pink sand and beautiful rock formations that have created coves. We stayed here for countless hours, floating in the blue water, and walking up and down the beach. That night, we took a private boat to downtown Hamilton where they had vendors, food trucks, parades, restaurants, and shops along the water. It was nice to talk to locals and hear their perception of the states and the people who live here, and many times I received the same answer of “not that friendly”. The people who live in Bermuda are the friendliest people I have ever encountered with. Everyone is looking to help you, make conversation and at the very least, say hi. During our 3 day stay in Bermuda, Rachel got severely sunburnt. Everywhere we went, someone made a comment about the sunburn on her shoulders, chest and back. On our last day, as we were walking back to the ship, a local Bermuda woman stopped us and offered Aloe for her, we tried to kindly decline, but she insisted on helping. We sit on a bench, and she says, “wait right here, I will be right back”. She crosses the street, goes into this garden area, and comes back with 3 aloe leaves. She spent the next 20 minutes cutting open the leaves and rubbing the aloe on Rachels back, talking to us the whole time about her childhood and how much better her sunburn will be feel afterwards, she was right.

On Thursday we rented a boat, it was during this time where we were able to explore the island and the water surrounding it on our own. We cruised along the coast, stopping numerous times at beaches, islands, and landmarks along our journey. While I’m sure some of the tours are great, having freedom to see and do what we want on our own boat was just what we were looking for. Friday, we headed to a much more secluded beach where a cooler, beach chairs and an umbrella (we needed it by now) were set up for us. After a couple hours here, we went back towards the ship, stopped at shops along the way and said goodbye to Bermuda. The next day and a half were sea days, and after a fast seven days, we were back home with our extremely happy puppy.

I think it is safe to say there are more cruises in our future, and most definitely in rooms that have a balcony!