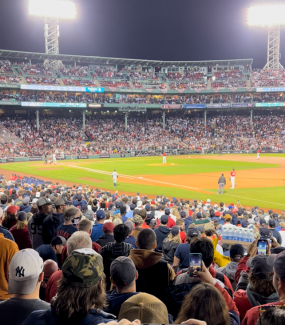 A Day at the Ballpark

Not very often do you get the opportunity to go to a game where the biggest rivalry in sports are playing each other in the biggest game of the year. Last Tuesday, I attended the Red Sox vs. Yankees wildcard game at Fenway. I have been a Red Sox fan my whole life. This is the one team in which I pretty much had no choice in who I was a fan of; there are photos of me in Red Sox jerseys, shirts, and outfits before I was able to speak. A couple of my friends were planning on going, they asked me and I figured why not?

Getting to a Fenway Park is not as easy as getting to Yankee stadium; there isn’t a train that drops you off right there. So we took the 2.5-hour drive, paid $50 to park right outside the stadium and headed in about an hour before first pitch. If you have never experienced the thrill of walking into Fenway Park, it’s an experience like no other. Fenway is the oldest ballpark in the majors yet is still one of the most beloved. Sure it’s not up to date with all the bells and whistles that some of the new ball parks have, but there is something to be said about “old school.”

While I do understand New York Yankee fans are spread all over, I was surprised as to how many of them were at this game. I would estimate about 35-40% of all fans were Yankee fans, in fact, 3 of the 4 other people I went with were Yankee fans!

The Red Sox got off to a quick start, scoring 2 runs in the first inning. While I’m sure many professional athletes have the mental strength to block out the crowd, there was not a chance Gerrit Cole was able to do so that night. Many fans brought Kermit the frog puppets because it’s said he talks like him, during his pitching routine the crowd was chanting “Geeeerrrittt”. I am a former pitcher and while I never played in front of a crowd nearly as large, certain things get to your head and when they do, it’s hard to get them out. My initial thought is “I feel bad”, I then remember he’s making 36 million this year, so I think he’ll be alright.

Going to the ballpark calls for some typical ballpark foods. Before we sat down, I got some peanuts, a Fenway frank, and a cold beer. Fortunately, I did not have to get up from my seat again as I was content watching good ole American baseball.

Nonetheless, the Red Sox ended up winning 6-2 in an absolute thriller of a game. The crowd was something I’ve never been apart of. The chanting, screaming, and thrill of runs being scored is a feeling like no other. I apologize to any Yankee fan that had to watch this game, forget about it and now read it through my perspective. But the rivalry continues on and each team will have their fair share of wins and losses.

This is an experience I will never forget. They say millennials live differently: Things no longer matter, experiences do. Much of this is true but making sure you are living life to the fullest is most important. Do what makes you happy. Have fun.