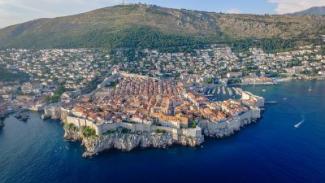 This is a bizarre story that unfolded over a period of three years. Jill and I were traveling in Italy in the spring of 2016 and had a flight scheduled from Venice, Italy to Dubrovnik, Croatia. We arrived at the airport and boarded our plane with no issues. Normally, I opt to fly on major domestic or international airlines because when something does go wrong, they (generally) have the resources and experience to fix the problem without a ton of disruption. The same can’t be said for some of the budget carriers, which offer low fairs but come with a significant element of risk/reward when things go array. The Venice-Dubrovnik route was only serviced with a direct flight by a Spanish airline, Volotea, and of course when booking I figured ‘what could go wrong?!’

From our seats in the front row of the plane (no first class on these flights – all economy!) we had a view of the flight crew as they prepared the cabin for takeoff. After the last passenger boarded, the flight attendant went to close the cabin door when I heard a distinct metal ‘thunk’ that definitely wasn’t normal. I’ve flow on enough planes to immediately know that this wasn’t going to be good. We watched the flight attendant struggle with the cabin door for a minute before watching him call over the other attendants and finally the pilot. Again, not good. From the broken Italian and Spanish I was able to understand, I was able to gather that the door was stuck and wouldn’t open or close.

Shortly thereafter an announcement came on that the flight was delayed due to ‘mechanical issues’ and that a mechanic would be on their way. The mechanic came and went, the whole time I’m watching the chaos from my front-row seat. Needless to say, we had been sitting on the tarmac for well over an hour when a final announcement came on and said the flight had been canceled. After deplaning us through an emergency hatch on the wing of the plane we were bussed back inside. This definitely wasn’t going to be good.

It got worse – the representative from the airline said we had two options:

To make it worse, the customer service for the airline was literally nonexistent, with only one representative who spoke broken English to serve a whole plane of people whose travel plans had been completely disrupted. Given the lack of realistic options to get us to our intended destination, understandably, everyone on the plane was furious.  Calling the airline did not yield any better results and aside from refunding our fare (which was only about $120 for the two of us) they offered no travel assistance, would not rebook us on another airline or offer any sort of compensation for lodging or other travel arrangements.

Rather than freak out like the rest of the people on the plane, I knew we had to think fast. Knowing it would be impossible to find a good flight by walking up to every airlines’ ticket counter in a major international airport, we had to get creative. Without the luxury of wi-fi or an English-speaking representative from the airline, I called American Express travel services and hoped they could get me out of the bind. Fortunately, the agent on the other line was incredibly helpful and found us an Austria Air flight leaving in less than an hour which would route us through Vienna but ultimately get us to Dubrovnik in time for dinner. Armed with the correct flight numbers, we were able to get ticketed on the flight (for a very steep price!), through security and onto the plane within an hour of departure. We had made it!

Wanting to enjoy the rest of our trip (and not wanting to rack up hours of international cell phone charges) we decided to forget about the nightmare in Italy and relax. Upon our return home, however, I was on a mission. I spent hours on the phone fighting with the credit card trip insurance, the airline, and really anyone else who would listen to no avail. Then I stumbled on AirHelp, an online service for those affected by flight delays, cancellations or other issues who may be entitled to compensation. They do the fighting for you, collect a fee from any compensation they receive on your behalf, and send you the differences. At this point, I had nothing to lose. I provided all the necessary documents (ticket stubs, boarding passes, passport photos, payment confirmations, etc.) and eagerly awaited a response. The first set of emails sounded promising, and it sounded like the ball was moving quickly. Then, crickets.

The communication frequency went from a period of days to a period of months, and I had pretty much written it off as a lost cause. I’d receive a periodic email every quarter or so saying something along the lines of “We haven’t forgotten about you, these things take time.” To me, these were no more than spam emails after the first two years. Fast forward to early 2019 and I see the title “You’re getting paid!” in my inbox.. I got excited, hoping there would be a check in the mail, or something concrete confirming payment was on the way. Then, crickets.

Two months later, I received another email in my inbox saying “Your $275.62 in compensation is here!” Again, I didn’t get excited but did entertain myself by opening the email. Sure enough, this was it! They finally were ready to pay. I am still baffled as the original submission occurred on June 6th 2016, and while it took over three years, I now have $275.62 that I didn’t have the day before. I’m not sure it’s a huge win, as the last-minute flight cost closer to $1,000, but for the minimal amount of effort it took I will certainly smile all the way to the bank!