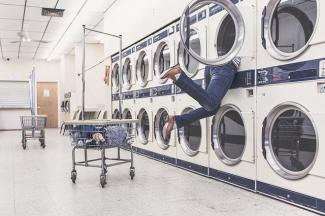 When I moved into my last house, we went through the inspection and one of the items I inquired about was the washer and dryer. They were stamped with a manufacture date of 1984 – which means they were older than I was. The inspector assured me that ‘they don’t make them like they used to’ and that those appliances would last a lifetime if maintained correctly. Hard to believe, but when we moved out 7 years later, those appliances still worked just as well as they day we moved in. And I didn’t have to do a thing to them.

The top loading Whirlpool appliances didn’t look sexy compared to sleek new models that dot the showroom floors, but there was something that felt right about their simplicity. An off-white steel body with a simple dial on the top. They had the minimum amount of parts necessary to get the job done with no bells and whistles to confuse the user, or worse, could cause a technical glitch. The only settings were those which allowed you to adjust the wash or dry time – and they were all delightfully manual compared to the electronic interface that today’s appliances have. No digital displays, wi-fi capability or access to thousands of wash modes. Needless to say, you didn’t need to be a computer whiz to run them because there was no computer! I’m not sure why companies ever deviated from this simple, satisfying and effective formula.

Moving into our new house required us to purchase a washer and dryer. We skipped over the ‘latest and greatest’ models, many that looked more like iPads than washers, and went to the back of the store where they had the ‘basic’ models that aren’t as eye-catching (or expensive). We told the salesman about our last experience and said we wanted something similar to what we had that would last a couple of decades. Our only requirements were that it was simple, economical and wouldn’t take us a year to figure out how to use – in other words, something that just worked. He laughed and said that unfortunately most new washers and dryers wouldn’t last more than 5-7 years, regardless of the brand. This is largely due to the electronics, which inevitably will short-out, at which point it is cheaper to replace the washer/dryer than it is to fix it given the cost of the electronic panel and the labor to install it.

Needless to say, we didn’t have any other choice but to buy something new. So far, so good, but it has only been a few months. Compared to the machines we had in our last house, these are definitely newer, cleaner and are painted a brighter white. From a practical perspective, they probably use a bit less water/electricity and hold a bit more laundry than their counterparts from the ‘80s. Aside from that, I enjoy the pleasant tone that LG decided to use when the laundry is done, which is far less jarring than the old-school buzzer that could wake an infant, even from the basement!