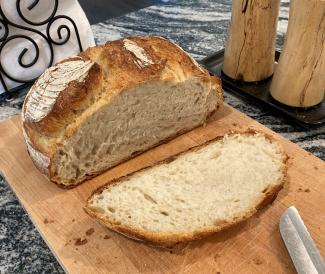 Donating One To Science

To help preserve my sanity over the past few months, I took some of my own advice and tried to learn a new skill. Committing to something new is not as easy as it seems, and there is definitely a filtering process that I went through to figure out what kind of new activity I’d enjoy. As with anything, time and cost are significant considerations, and I wanted to try something that didn’t cost me a fortune and that I could enjoy while still making sure I wasn’t neglecting my child or pregnant wife. I couldn’t imagine learning to build Adirondack chairs or take up photography with such limited resources, so I settled on baking. But not cookies and cakes, I wanted to make something that I enjoy even more than sweets – bread. The cards were stacked in favor of my success, and more importantly, if all went according to plan, my stomach and taste buds would be the ultimate beneficiaries. Plus, you can drink wine while you bake, that’s what I call a win-win!?

As most people know, baking, unlike cooking, is more science than art. There is no ‘a pinch’ of this or ‘a dash’ of that in the recipe book when something needs to be baked to perfection. To achieve the best results, ingredients need to be weighed out (yes, on a scale) to the gram, timetables need to be followed with accuracy and bake time and temperature need to be perfectly synced. I’m generally good at following instructions and enjoy keeping things precise, so I figured at the most basic level I’d be able to figure it out.

After consulting with a colleague of mine who has taken his bread baking game to the next level, he recommended the book Flour Water Salt Yeast: The Fundamentals of Artisan Bread and Pizza by Ken Forkish. It was worth the $15 to have some quality guidance (as opposed to just Googling a recipe and hoping it worked) about how to make delicious, warm, crusty bread right in my own kitchen.

One variable I hadn’t taken into account was, shockingly, the pandemic. It appeared I wasn’t the only one who wanted to bake bread while stuck at home. Fortunately, I already had a Dutch oven (the only tool that is necessary to make recipes in Ken’s book), because from a quick search, those were backordered until the Fall. But what I did need was yeast. While much of the media hype was focused on toilet paper and hand sanitizer, yeast flew under the radar as yet another sell-out item nationwide. Amazon had nothing, and I couldn’t find any in stock anywhere online. Against my best judgement, I went on a crusade to every store in the area looking for yeast, after visiting at least 4 stores multiple times each over a period of two weeks, Big Y came through and I got the last 4 oz packet they had.

During the rain delay caused by my yeast-hunting, I had time to order a couple of other items that were recommended in the book – fortunately those items came in quickly. I splurged on a thermometer, scale and proofing baskets for a total of about $50, which proved invaluable when it came time to execute. With yeast in hand, I was ready to roll.

The recipes themselves are not terribly difficult, and don’t require any special ingredients other than those listed in the title of the book. After fumbling through the mixing and folding techniques, it was time to let the dough rise. I got nervous at first as I expected to see visible progress every time I looked at the dough sitting in the bucket. I guess it is like what they say about watching water and waiting for it to boil… Science began to work its magic and after a few hours it was clear that the dough did, in fact, rise. After a couple of more folds and an hour in the proofing basket, it was ready to cook.

A glass or two (or three) of wine later and it was finally time to take it out of the oven. To my surprise, it looked just like the loaf pictured in the book. A nice dark brown, some cracks on the top, and a dusting of white spots from the excess flour left on the dough before cooking. The cooling period felt like an hour (it was 20 minutes), but it was worth the wait. With the first cut into the loaf with the bread knife, I knew it was going to be good. That fresh-baked bread smell filled the room and Jill, Kyle and I just looked at it like kids on Christmas morning.  I wasted no time getting out some good olive oil and we savagely tore through about half the loaf in about 15 minutes. The best part? All the recipes in the book yield enough dough for 2 loaves, meaning that I was able to bake another one the next day without all the prep-work!