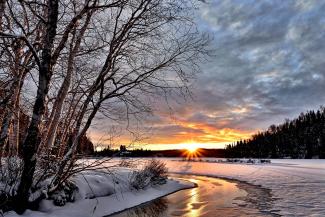 Ending on a High Note

Following on the heels of a lackluster third quarter in equity markets, Q4 was as strong as anyone could have hoped. The S&P 500 returned nearly 10% during the last 3 months of the year, and 26.9% in 2021, leaving September’s volatility in its rearview mirror. That’s not to say, however, the fourth quarter came without its share of bumps and bruises as we experienced two pull backs of nearly 5% in the last 40 days of the quarter. Volatility persisted as the Omicron variant of COVID-19 took the world by storm and news of the Fed’s intent to raise interest rates sooner than expected hit the headlines. The Federal Open Market Committee (FOMC) took a more hawkish tone in Q4 in direct response to both rising inflation and an economy that is showing signs of health despite labor and supply chain shortages. It may feel counter intuitive following our experience in Q4, but history tells us increasing interest rates and strong prior-year equity performance are generally a positive indicator for what is to come.

The most well-known (but not necessarily the most accurate) measure of inflation, the consumer price index (CPI), climbed 6.8% year-over-year this November, according to data released December 10th by the Department of Labor. While that was in line with many economists’ expectations, it represents the highest year-over-year increase recorded since 1982. As we said in our message from our third quarter review, it is important to remember that inflation is normal in a healthy and growing economy.  Inflation itself is not the risk, but the manner it presents itself and the subsequent response from policymakers is what can increase risk and drive volatility for investors. Messaging from the Fed during December was a main catalyst for the 4% pullback in equity markets that occurred just before Christmas.

The FOMC meeting minutes released on January 5th, 2022 reaffirmed this sentiment and was the catalyst for a similar market effect, causing a sharp equity selloff in the last few trading hours of the day. Details of the minutes confirmed an increased probability that rates would likely be raised faster than originally intended. Additionally, Fed officials indicated their plan to begin selling (rather than buying) corporate and treasury debt securities later in Q122 (colloquially known as ‘unwinding the balance sheet’).  A decision that, in our opinion, is needed and healthy for markets subject to the inflationary pressures that developed in 2021.

Typically, growth and technology stocks benefit the most from falling and low interest rates which also makes them the most sensitive to changes in interest rates when the pendulum swings the other way (interest rates, specifically those of the 10-year treasury, are a material factor used to evaluate stock valuations). This is reflected in the recent performance of the tech-heavy NASDAQ index which was down roughly 4.2% during the first trading week of 2022, compared with the more value-heavy DOW which ended the week at virtually the same level that it started at. The S&P 500, by comparison, ended the week down about 1.6%. This does not mean, however, that there is not opportunity to be found in the equity markets in 2022, it just confirms the simple fact that companies that were last year’s market leaders may not be this year’s market leaders.

Extremes in equity markets have an interesting way of generating emotional response.  After a year as strong as 2021, some may feel it isn’t likely to continue (the feeling of ‘we’ve reached the top’), while others get caught up in the euphoria and double down.  We, on the other hand, rely on data and facts, rather than emotion, to make informed investment decisions. “The truth is, big yearly gains likely take place in larger bull markets, so don’t get a fear of heights just because of what happened in 2021,” explained LPL Financial Chief Market Strategist, Ryan Detrick. “In fact, the past seven times the S&P 500 gained more than 25% saw the next year higher, with five of those years up double digits.”  As shown in the chart below, the S&P is up nearly 12% on average, and has a positive return 86% of the time following a year that is positive by 25%. 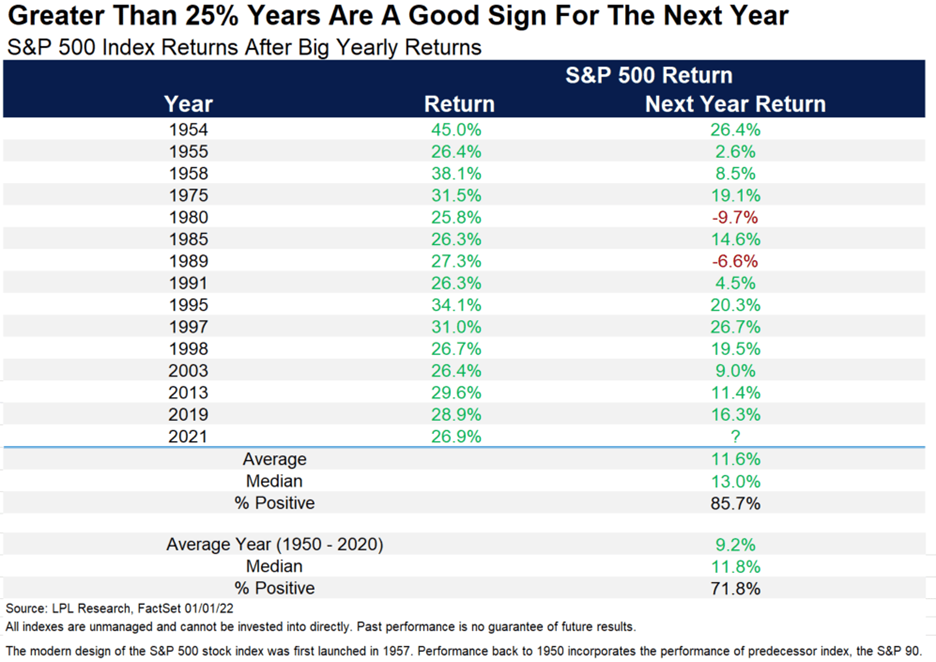 With increased headline risk stemming from COVID case counts, interest rate uncertainty, supply chain disruption and inflation, it is easy to let emotions impact our judgement. These fears can be further compounded by the parabolic rise in stock prices that investors have witnessed since the market bottomed on March 19, 2020. We acknowledge fact that risks are always prevalent in any financial market and becoming complacent is equally as dangerous as becoming too emotional.  Despite all the noise, however, we continue to have confidence in the opportunities available to long-term investors – and remind them that patience and discipline are key to generating positive investment outcomes.

The opinions voiced in this material are for general information only and are not intended to provide specific advice or recommendations for any individual. All performance referenced is historical and is no guarantee of future results. All indices are unmanaged and may not be invested into directly.
The economic forecasts set forth in this material may not develop as predicted and there can be no guarantee that strategies promoted will be successful.
All investing involves risk including the possible loss of principal. No strategy assures success or protects against loss.
The content is developed from sources believed to be providing accurate information.