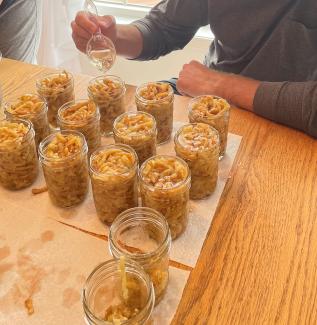 As autumn approaches, many families begin partaking in an abundance of traditions. Whether that’s apple picking, pumpkin picking, pumpkin carving and painting, a huge leaf pile, Halloween decorating and much more! Next comes Thanksgiving, where recipes are passed on from generation to generation, football games are played and watched, and card and board games are played. From there the holiday season kicks into gear as Hanukah, Christmas and New Years bring their own set of family traditions. All these traditions are annual connections, to our friends and families, passed from one generation to the next… until they aren’t. People move, go to college, pass away, get married, or start their own lives. I’m sure you thought of your own childhood traditions while reading this, and I hope they’re good memories. Sometimes starting a tradition may be difficult but once they’re off and running, they’re awesome. Well, this year, Rachels family and I spent all day a couple Saturdays ago, making pickled eggplant and hope to keep the tradition going for years to come.

To be honest, the process of making pickled eggplant intimidated me. I spent my fair share of time on google and Youtube reading and watching the process of making pickled eggplant and thought to myself “there’s no way we can make this”. Sure enough, we did. Thank goodness for Rachels grandmother, who made pickled eggplant plenty of times years ago and knew exactly what she was doing. If it wasn’t for her, we would have been lost numerous times. For those of you unfamiliar, pickled eggplant is exactly as it sounds, typically served as antipasto (appetizer) with fresh bread and meats before a meal. One of my favorite ways to eat it is on a cold cut sandwich, but you can put it on pizza or paninis as well.

First, we cut the eggplant into fry type slices, putting them in a large wooden basket that is in a bowl, allowing the juices to slowly pour out. Between each layer of eggplant, we would heavily salt it. Once the basket was full (about 15 eggplants) we placed a dinner plate over the eggplant and weighed the plate down with a heavy bottle of oil. This allowed the eggplant to compress, causing more juice to flow out into the large bowl. After draining the excess juice, we then grabbed handfuls of eggplant and squeezed them extremely hard, causing every ounce of juice to pour out. (This is why traditions are great, we know not to do this again and next year we will have a wine press to do this for us). After it was all squeezed out, we poured the eggplant into a warm bowl of vinegar and let it sit for 3 to 4 minutes. Then we let it cool down and squeezed the eggplant once again but not as much as we wanted some of the vinegar to stay in. After adding oil, crushed red pepper, and garlic, and putting it into jars, we were done. Now, I oversimplified the process as it took us about 4 hours from start to finish but it was not as labor intensive as I had imagined (except the squeezing part). We let the jars sit for about a week and bon appetit!

Taking plenty of photos and capturing these unforgettable moments allow for these traditions to be captured for many years, the stories and rituals can be re-lived, passed on and resurrected if they happen to get skipped. So, as you dust off your Halloween and Christmas Decorations and hunt for the perfect pumpkin, take an extra picture or two. Jot down the funny jokes or sayings made by your parents, grandparents, kids, or grandchildren. Family traditions make up most of my childhood memories, ones that I’ll never forget and now I have one more.