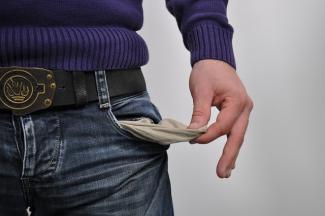 I started saving money as soon as I knew what money was. I would do my chores around the house for $.25 per week. No job was out of the question, from raking leaves to shoveling driveways, whatever, as long as it paid. Pennies, nickels, dimes, quarters all ended up in my bank which was no more than an empty Maxwell House coffee can that I kept hidden in the back of my closet. It was exciting to shake the can and hear the coins clanking around. The sound of money was wonderful.

As my can filled with coins, I would gradually trade in coins for bills. It was the beginning of my understanding of the concept of quality versus quantity. Even though the clanking of the coins that I so enjoyed was muffled by the bills, it was very exciting knowing that my coffee can was worth more filled with bills than with coins (and lighter in weight as well). I was now obsessed with bills. Over time, as my coffee can started to fill with bills, it was time for the next step, it was time for a wallet.

I mentioned the wallet dilemma to my Dad. He said that next time we went to Sears, he would help me select one and it would have to be purchased with my own money. That was weird, I had to spend money to buy something to keep my money in. The coffee can was free. I was about 12 so what did I know. So off we went to Sears and it was one of my first experiences with buying something with my own money other than candy or ice cream from the Good Humor truck. It was beautiful. A shiny (fake leather) black wallet complete with a zipper section to keep the bills safe. I liked that feature. It also had the clear plastic section with the Personal Identification Card. I liked that feature too because if my wallet was ever lost or misplaced, it would be clear who was the rightful owner.

When we got home, the first thing I did was fill out the Personal Identification card in my best penmanship, including the phone number. Then I “filled” the wallet with my bills. All heads on the bills going the same way with the smaller bills in front and larger bills in the back. Instead of pennies, nickels and dimes, my wallet had some singles, a $5 and a $10 bill. I was rolling in the dough. It is so vivid in my memory when I traded all my bills and had my first $20 bill. It was the only bill I had but it was impressive. It was well protected in the zipper compartment of my wallet.

One day, a bunch of us decided to go for a bike ride to get an ice cream at the stand (now the Sandpiper) by the town beach in East Haven. It was 3-4 miles, but we were from ‘Staven and we rode all over, so this was just another adventure. Even though I would have to break my $20 bill, it was what the money was for. A quick run back into the house and digging deep into my closet I took out the wallet. Back outside I proudly showed off my wallet to my friends and unzipped the section and flashed my $20. They were all impressed.

With my wallet in my back pocket off we rode. When we arrived, we were all deciding what to get. I reached for my wallet….it was gone. It must have fallen out during our bike ride. I was absolutely freaked out. I looked around where we were standing. Nothing. I jumped back on my bike and rode all the way home retracing the route. Nothing. It was devastating. Not only was my money gone but also the wallet. But wait, I filled out the Personal Identification card complete with phone number. Surely whoever finds the brand-new wallet with the $20 bill in the zipper compartment would call the number and return the wallet with the contents to the rightful owner. I waited for the phone call for weeks.

That event happened over 50 years ago, and I am still waiting for the phone to ring.