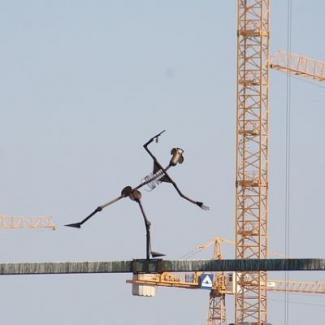 Getting Back On The Right Foot

I’m not one to enjoy hanging out in a hospital, much less be a patient in one. Fortunately, I’ve had the pleasure of largely avoiding hospital visits with the exception of my father’s various knee surgeries, Kyle’s birth and most recently Jill’s foot surgery. While the timing of Jill having surgery on her right foot was inopportune to say the least (as Kyle is now crawling at a very rapid pace, standing up and testing the waters in walking), it was nearly 15 months in the making and definitely much needed.

During her pregnancy with Kyle (on St. Patrick’s Day 2018), she slipped off a stair and severely sprained her ankle. This led to several trips to the doctor, a walking boot and physical therapy, all of which made little impact on her ability to recovery fully. Over time, the pain subsided as the trauma from the initial injury wore off, but there was still lingering pain that was debilitating at times. Diagnostic imaging (x-ray, MRI, etc.) was not recommended while pregnant and was deemed to be a last resort which we never opted to take. The ongoing pain was overshadowed by being progressively more pregnant throughout the summer and subsequently being a parent to a newborn. No time to be hurt when there’s an infant in the house!

Finally, it caught up to her and she opted for an x-ray earlier this year, which confused even the doctors as it didn’t show anything was wrong. Some more physical therapy didn’t seem to help, and we finally conceded to do an MRI. Voila! We had a diagnosis. In addition to a small broken bone in her foot, the MRI showed it had become dislodged and was periodically floating into her ankle joint which was causing the acute pain. Additionally, she had a ruptured ligament inside her foot which was making it even more difficult to recover. Long story short, she had been walking around on a broken foot for over a year. The end result: surgery.

After consultation with the surgeon, we realized it could be much worse. He felt confident that removing the bone would give Jill a very favorable chance of a full recovery. This would negate the need to fix the ligament and force Jill to stay off her foot for 6 weeks. No one was happier about this recommendation than me! As nothing was to be ‘repaired’ inside her foot, she was able to walk out of the hospital on her own power and is now on the mend. So far so good!

Overall, the experience was a positive one and was as pleasant as a day in the OR (or in my case, the waiting room) could have been. We were in the newly renovated McGivney center at Yale which is a beautiful facility attached to the St. Raphael’s campus. It even has private parking right outside the front door, alleviating the stress of finding a garage in New Haven and walking a mile to the hospital. From the minute we checked in, the nursing staff made both of us feel at home and we had a private space to relax in while Jill was getting prepared for surgery.

I was relieved to hear all had went well when I met with the doctor in the post-op meeting. He even had a set of pictures from inside her ankle to show me what was wrong and what was done to accomplish it. Most of what he said was way above my level of comprehension, but it sounded good and he felt confident that this should help Jill get the strength back in her foot and on the right path moving forward.