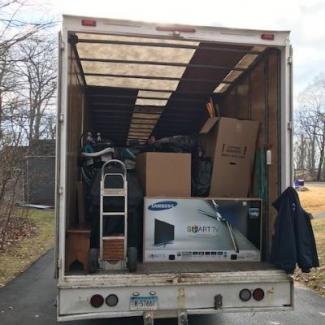 Getting Out and Getting In

As the old saying goes, it takes a village to raise a child. In our case, it took a village to move us out of our old house and into our new one. We had a 24-hour turnaround from when we had access to the new house until we had to close on the sale of our old house. On moving day, we looked like the Clampett’s as they moved from the Ozarks to Beverly Hills, but fortunately we didn’t have to go nearly as far. In hindsight, it worked really well and forced us not to drag our feet, but in the moment, it was complete and utter chaos.

When I scheduled the movers and requested a quote, they had asked what items we needed to move. I gave them the standard ‘we don’t have that much stuff’ and tried to mentally walk through the house and quantify what was going. I estimated about 50 boxes in addition to the 6 or so pieces of furniture (bed, couch, crib, dressers). I was also not home when I talked to the movers and was just shooting from the hip with those estimates. It’s safe to say I missed my mark… by a lot.

Because my estimation was so far off, the movers were caught off guard when they arrived and took an inventory of what was actually getting put on the truck. Apparently, I neglected to mention a number of items during the quoting process, which included multiple famed pictures, a dresser, some bar stools, a set of tires, storage racks and a couple of TVs. One of the mover’s quipped that I was lucky that they sent 3 guys and a big truck (as opposed to 2 and a smaller truck), otherwise we would have been screwed.

After seeing the truck packed to max capacity, I put my tail between my legs and said, ‘You must hear this all the time, but I didn’t realize how much stuff we had!’ Gross miscalculation on my part. They laughed and said, yes, all the time. Fortunately, they took it in stride. In addition to the packed moving truck, we made at least a dozen car trips with the more fragile items like glassware, food/booze, electronics and clothing.
Of course, there were the many items that we couldn’t get on the truck because of my estimation error. Fortunately, most of it we were able to throw in the car, but there was one storage rack that was too large for any of our vehicles and could not be easily disassembled. After debating the best way to get it from one house to another, I decided I would just run it the ½ mile from old house to new house. Lucky for me, it was on wheels and there was more downhill than uphill on our way there. I must have looked like a nut, but I was able to stand on the rack and ‘ride’ it down the street. Needless to say, it garnered some strange looks from drivers passing by.

In the past 15 days, we’ve made what I consider to be an incredible amount of progress. Aside from the basement being a bit of a mess, the living area of the house is in great shape. Our new furniture is in, boxes are out of sight, the kitchen is together, and our bedrooms and closets are all in working order. With the ‘big’ things out of the way, we can relax a bit. Now it’s down to the little things as we attempt to get settled and turn our house into a home. This certainly would not have been possible without the help of my parents who graciously kept Kyle for a couple of nights while we got ourselves settled, and my father who hung all of the blinds in our new home. Thank you!

I will admit that between all the excitement there were moments of sadness moving out of our house. We had been there just under 7 years and our first home saw us through many of life’s biggest events. It’s the place Jill and I got engaged, became newlyweds and where Kyle was brought into the world, where he said his first words and took his first steps. When I was a child, I was only a hair over one year old when we moved from Hamden to North Haven and have no personal memories of my first home. I know it will be the same for Kyle. Lucky for all of us, we are only a few steps away and we’ll be able to remind him of all the fond memories we had in our first home.