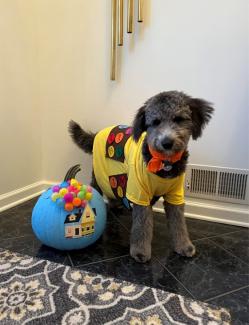 Every year it seems that Halloween gets skipped over, with stores quickly putting out their Christmas and Hanukkah displays, however, I intended on relishing it! Halloween for me is enjoyable because it happens during my favorite time of the year, and it involves some of my favorite things: candy, apple cider, apple crisp, and a day spent at the apple tree farm, which we’ve made a tradition to do every year and this year with Mason, as you saw a couple weeks ago!

As a kid, I always looked forward to trick-or-treating the most, because of course, candy. Plus, I was able to dress up, run around the neighborhood with my siblings and friends, and on the years it wasn’t too cold, I loved breathing in the crisp fall air. There was one house in particular that we always made sure to stop at: Mrs. Putney. Mrs. Putney was an older woman who gave out full size candy bars (she knew what she was doing), she would set up her living room with tables, chairs, food, music, decorations, and spooky Halloween drinks. She made sure that every kid going around the neighborhood stopped inside her house for a special event. There was always conversation about what she had going on inside her house for months after Halloween and quite frankly, it made Halloween night that much more fun!

Then came a point where I was too old to go trick-or-treating so instead of receiving the candy, I now pass it out! Which surprisingly is enjoyable, seeing all the kids in different costumes, putting a smile on their faces as I throw a handful of candy in their baskets. Last year in general was not a memorable year for many but specifically Halloween night when we were forced to just put a bowl of candy out front. Because of this, it made this Halloween much more exciting!

A fun Halloween memory I have is the many times I would go to a scary theme park, or haunted house/trail. My friends and I would go to 3 or 4 every year and would have a blast! For many years, Wallingford had a great trail that had plenty of different themed rooms, with real people attempting to scare you in each and would end with a masked man chasing you out with a chainsaw. Now that I am older, these types of things are less interesting and honestly, I am more afraid now than I was as a kid.

This year, we decided to make Mason’s ‘costume’ by hand, because it’s more gratifying than pulling a costume out of a box from a store, and it’s a lot more personal! If you have ever seen the movie “UP”, you know that Russell is a loud, hyperactive, high-strung, curious boy, what you don’t know is that Mason is a spitting image of Russell. So, Mason dressed as Russell from UP this year. Russell is a Wilderness Explorer, aka a boy scout who wears a yellow shirt, an orange scarf and brown satchel that consist of badges.

Creating this costume was actually fairly easy, a yellow t-shirt from Michaels, a brown shirt from Michaels which we cut to make a scarf, a brown piece of felt to make the satchel and colorful felt to make the ‘badges’. Mason’s badges consisted of accomplishments, tricks, and things he loves. Surprisingly to me, Mason did not care about being dressed up; he just galloped around as if nothing was on him.

What a great Halloweekend!