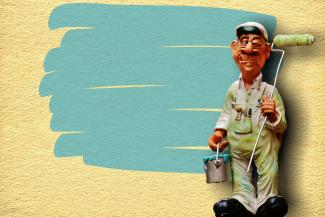 A few weeks ago, my dad wrote about learning the value of a dollar as a child by picking up just about any odd job someone would pay him for. I guess the apple doesn’t roll far from the tree as I, too, had an entrepreneurial spirit at a young age. I started small, like my father, shoveling driveways in the neighborhood, but I soon bit off more than I could chew when I tried my hand at painting. Again, it started small, a bedroom here, a bathroom there. After doing a detached garage by myself, I realized it was time to enlist the help of my trusty friend Mike. Soon thereafter, Happy Housepainters was born. We were unincorporated, unlicensed, uninsured and had virtually no idea what we were doing. It was great.

There was nothing official about our “business.” Our strategy was simple – severely undercut the competition on price and hope we didn’t screw it up too bad. In this world, as the adage goes, you get what you pay for. After completing our first house exterior, we were riding high. Our customers were happy, the house looked surprisingly good, and we were flush with cash (even though we probably made the equivalent of $6/hour!). Nothing could stop us.

A few small jobs later, we landed another home. This project was doomed from the start, and I blame my partner to this day. He did a drive-by quote (if that’s even a thing!?) for the project and was the primary contact with the homeowner. From the street, the house appeared to be a small ranch with a mostly brink front – meaning very little painting on that side of the house aside from some trim. The side of the house that was visible from the street appeared straightforward as well. He quoted $2,500 for the whole gig.

We were thrilled to hear that we’d gotten the job and were excited to get going. I had yet to see the house. When I pulled up the first day, I had a great first reaction – this will be easy! We’ll be out in two days and make some real money. Reality soon set in as I did my first walk around of the property. What wasn’t visible from the street was the drop off in the back yard. The house was actually two stories high in the back, complete with a deck, which apparently was included in our price. It was the quote that almost ended a business and a friendship simultaneously. We slaved over that damn house, and still laugh about it today, but learned a valuable lesson.

If you’re wondering how we came up with the name, it was out of irony. I truly hate to paint, just about more than anything, and am miserable when I’m doing it. For some, its therapeutic. For me, it’s a roller coaster ride through Dante’s nine circles of hell. Throw the adverse effects of a late night into the mix and it was a toxic cocktail of sweat, anger and comedy. We worked hard. We complained. We laughed.  But for some reason, we sucked it up and showed up for work day-after-day. I still don’t know why. The money wasn’t great, the days were long and hot, and I had to fend off numerous angry bees during the process.

Looking back, all we can do is laugh – which we do often when we think about that fateful summer. The stories are plentiful and the memories are nothing short of priceless. Mike and I remain very close friends to this day, and often reminisce of our days sweating 15 feet up on a ladder in the blazing sun. Maybe we both learned something that summer, not just about business, work ethic or painting – but about ourselves and what we were capable of. Fast forward nearly 20 years and we’re here today. I may be a bit bias, but I think we turned out alright. You all know my story, and Mike is now a successful entrepreneur himself. Maybe hard work does pay off?