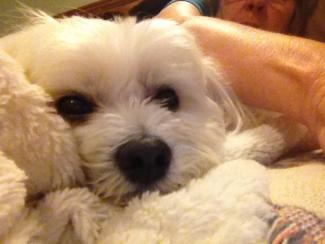 He'll Always Be My Buddy

Religious beliefs aside, I think it’s hard to argue against the notion of fate. I understand the concept well, but never looked up the formal definition of the word. According to Google, fate is “the development of events beyond a person's control, regarded as determined by a supernatural power.” Buddy came into our lives nearly a decade ago, and it appeared to be fate at work. When fate does its best work, something special happens. Buddy quickly became a fixture in our family, and we all grew to love him (like a child/grandchild/brother/cousin – Buddy had a big family!). When you don’t grow up with pets (which I never did), it is hard to understand how much someone could love an animal. After living sort-of first-hand with Buddy over the past several years, I’ll never forget how easy it was to fall in love the little guy – even despite his best attempts to rip my ankles apart. Which is why it was so hard to say goodbye to him earlier this month as my parents had to make the hard decision to put him down to rest.

For those that may not remember, Buddy was originally Jill’s mother’s dog prior to her passing in 2008. Over the next several years, he spent time with Jill’s family and friends, moving from a farm, to living alongside two single 20 year-old women (Jill and her sister, at the time), to New York City and finally he retired and spent his golden years as a snowbird with my parents, commuting between Connecticut and Florida. I’ve joked many times that if reincarnation is a real thing, I wouldn’t mind coming back as Buddy.  I also think his life’s story would make a great children’s book – but that’s another story.

It was a perfect culmination of events that brought Buddy to our family, not the least of which was timing. In 2013, I was in a new relationship with, Jill who was working crazy hours as a nurse. My parents were starting to suffer from ‘empty nest’ syndrome as my sister, Kelly, was in her senior year at college and had committed to moving to NYC after graduation in early 2013. I had just moved out and into my own home. Without the chaos of two children – and all their friends – buzzing around, the house was quiet.
At that time, Buddy was living part-time in NYC with Jill’s sister and part-time in Branford with Jill. Between work, social life and travel, it was hard for Jill and her sister to give Buddy the attention any dog needs. And then my mom met Buddy. And the rest, as they say, is history. It was a win-win all around, Jill and her family still got to maintain their connection to their mother’s dog, my parents had a new element of chaos to spice up the quiet house and Buddy found a loving home to spend the second chapter of his life.

I hope that one day Kyle remembers his time with buddy and, fortunately, there are plenty of pictures to help jog his memory. They had a special connection and it was clear he loved him like a brother. He was always quick to pet him, give him a huge, let him lick his face and never forgot to feed him under the high chair. Buddy shared his love with Kyle as well. He was protective of him, would lay next to him on the couch in front of a movie and even let Kyle (inadvertently) pull his fur or tail without biting him. It is a true shame that we won’t get to watch that relationship flourish as Kyle grows older and more interactive, and it is an even bigger shame that Ryan will never get to form a special connection with him as Kyle did.

Whether there is another dog in any of our future is an unknown, but one thing is for sure, that Buddy was so special to all of us that it will be impossible for anything else to fill his shoes.