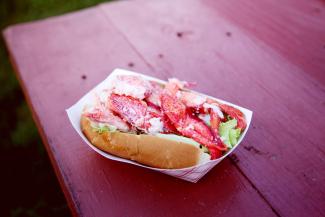 I have always loved a good lobster roll. After all what is not to like? Growing up on the CT shoreline has offered so many opportunities of where you can enjoy this succulent delight. With so many seafood choices available, lobster seems to fall into a category all by itself. Yes, lobster is a crustacean like crab, but lobster not only tastes different but has a totally different consistency as well. Anyway, lobster has a special place in my heart or should I say my stomach.

The high price of lobster also adds to the allure (fun fact – lobster used to be so plentiful and cheap that is was served to prisoners, apprentices and slaves during the colonial era because it was not deemed to be a delicacy). When you pay for something that has a premium price tag, your expectations are set at a higher level than if you were ordering a burger. Nothing against a good burger but you can’t compare the best of burgers to a lobster roll, even if the lobster roll “isn’t the best you ever had.”

That brings me to comparing lobster rolls to each other and not to other seafood or food of any type for that matter. The Connecticut lobster roll is unique – served warm, on a hotdog roll with melted butter. Let’s analyze this very simple recipe. Three ingredients, lobster, roll and butter. How can one screw up such a simple recipe? There is a saying that “too much of a good thing can be bad.” Well, I have never, and I repeat never, ordered a lobster roll, and was upset that there was too much lobster. On the other hand, I have said there was too much roll which is another way of saying there was not enough lobster. Butter has always been an item that adds flavor to just about anything that you eat. This is an example of where too much butter can ruin a good lobster roll in my opinion. Some people may love their lobster swimming in a pool of butter. Too much butter turns the roll into mush and when attempting to pick up the roll it falls apart and you no longer have a lobster roll. Now you have a pile of lobster and mushy, butter-soaked bread. Still very edible but a little too much butter. As with any sort of food, striking a balance is critical to perfect execution. When done properly, you know it with the first bite. Is your mouth watering and are you craving a lobster roll or what?

Shift gears, a cold lobster roll with mayonnaise and chopped celery. It just doesn’t have the same appeal and allure to me. This seems to be the traditional Maine and Massachusetts recipe, with Rhode Island usually offering both to keep everyone happy. I put mayo on cold cuts, not lobster. If ever given a choice between a lobster roll with warm butter or mayonnaise, it is a no brainer. Give me the warm butter anytime. Cathy and I were recently in Newport and we went down to the fishing pier to order a lobster roll, fresh off the boat. I was excited until I found out it was cold with light mayo. Now, given a choice between a lobster roll with mayo and a cod sandwich, lobster will win every time. The saving grace was I was able to chase the cold lobster roll with some hearty New England clam chowder.

That is one of the great things about food. Everybody’s taste buds are a little different. I know people who are allergic to lobster. What a bummer. If you can’t eat something for health reasons it is totally understandable. Treating yourself to an occasional lobster roll is one of life’s pleasures. There are so many places that offer them on their menu. In East Haven, Sandpiper, and the Lobster Shack. In Branford, Lenny’s, Thimbleberries and Dockside. In Guilford, The Lobster Pound. In Madison, The Clam Castle and Lenny & Joe’s. In Clinton, The Landing and Shank’s. In Westbrook, Liv’s Shack. I will stop there because there are so many and would love to hear your feedback on where you go when you are craving a lobster roll.

Enjoy your next lobster roll with me in mind. Life is Good!