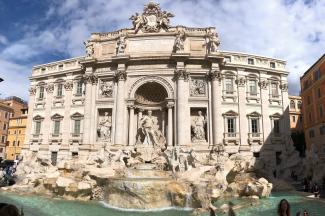 I previously wrote about studying to learn the Italian language which was in essence the first of a multi writing series about our trip to Italy. For those that have traveled abroad, you are all too familiar with the initial travel day. You know the drill, getting to one of the NY/NJ airports can be a fiasco into itself. Then there is the red eye flight where you are supposed to sleep. Many can sleep on a plane, but I am not one of those people. It is more that I get in a zone rather than sleep. Finally, we arrived in Rome and had a 45-minute cab ride to our hotel where we were just spending the night in route to Cinque Terre. We arrived at our hotel at 9:30 AM. We had an entire day in front of us but all we wanted to do was check into our room and take showers and rest for a bit. To our dismay, our room was not ready, so we immediately went to plan B which was, let’s go see Rome.

We had been to Rome in 2016 and wanted to see areas that we missed on our first trip. Even though we stayed near the Trevi Fountain on our last excursion, the fountain and the Spanish Steps were both closed for renovations. So off to the Trevi Fountain and Spanish Steps we went. As tired as we were, adrenalin kicked in and the sights and sounds of Rome were everywhere and pushed us forward. The Trevi Fountain was beautiful, and we hung out there and had some croissants filled with chocolate and pistachio cream. The schlepping to that point was worth it to eat those scrumptious croissants. We then made our way to the Spanish Steps and had to walk to the top. It was worth the effort. At this point we were running out of steam and took a cab back to the hotel. Our room was ready, and we took showers and had a power nap. Feeling somewhat refreshed and hungry, we hit the streets of Rome to find a restaurant for dinner. That exercise to find a restaurant was not hard at all in that we were staying near the train station and there were many options as to where to dine. The food and wine were exactly what we had hoped for and enjoyed every morsel and sip.  Now, the day and night before caught up to us, so we decided to go back to the hotel and call it an early night. Before retiring for the evening, we went to the rooftop bar at our hotel for a night cap. The view of the entire city of Rome, coupled with a nice glass of local wine capped off an exhausting day. I am tired thinking about it all over again. Finally, back in the room, we were asleep is seconds.

We had a busy travel day in the morning leaving on a 6-hour, 420-kilometer train ride up the west coast of Italy to Cinque Terre. Fortunately, our hotel in Rome was directly across the street from the train station, so it was a quick 5-minute walk. The train left Rome in the morning, we transferred to another train in Pisa and yet another in La Spezia. Not done yet, we had one last train from La Spezia to Vernazza. The last leg of the trip to get to our hotel was climbing straight up the side of cliff where our room was perched on the side of that cliff overlooking the water. We coordinated with our concierge to have someone carry our bags up the side of the mountain which was worth every Euro we paid. It was a long day of train rides and schlepping our suitcases up and down train platforms and on and off trains.

Finally, we arrived in our room, and every moment of schlepping over the last 36 hours was worth it when we opened the curtains and went out on our balcony and saw our view. It was a moment that we have dreamed about for years. Cinque Terre we were finally here!

There will be more to come about our three-day stay here as well as when we continue our adventure to Orvieto and Assisi, both in the Umbria region.