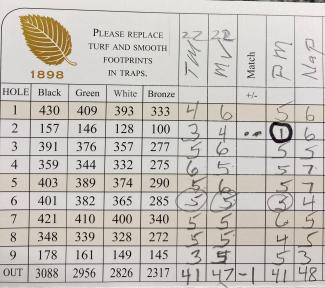 Every golfer dreams of the same moment. Whether your version occurs at the 12th at Augusta, the 7th at Pebble Beach, the 17th at TPC Sawgrass or the 16th at TPC Scottsdale, the rest of the story is inevitably the same. It starts with standing on a beautifully manicured tee box where you begin your shot sequence by sizing up the distance, wind and pin placement. You carefully select the perfect club, calmly address the ball and make an effortless, yet perfect, swing. There’s a moment of silence before the ball hits the apex in the air, and you hold your breath as it falls towards its target. It comes down soft, maybe a few feet past the hole, checks up nicely and slowly rolls backwards - followed by a satisfying noise instantly recognizable as a golf ball hitting the bottom of the cup (you golfers know the sound) - and into the hole for your first ace. The crowd goes wild! Well I wasn’t at Augusta, Pebble Beach or getting cheered on by a crowd on national television – but I did have my first hole in one, and it was even more exciting than anything I could have dreamed up. The unfortunate part is, I didn’t even know it happened. At least at first.

If you’ve ever played New Haven Country Club’s second hole, you are likely already nodding in agreement and saying ‘mmm hmm’ under your breath because you know exactly what I’m about to say. The second hole is a challenging par three – 146 yards and up a reasonably steep hill, meaning a blind shot to the green. From where you’re standing down below, only the top half of the flag is visible, and it is impossible to tell if it is on the front or back of the green. Even if you make it up and onto the green safely, the trouble doesn’t end until the ball is stationary at the bottom of the cup. Putting can be treacherous, and many great rounds have been ruined only two holes in by a missed putt that rolled all the way off the front of the green. Basically, you want to pray for three good shots and move on to the next hole with a par on the card.

On Friday September 25th, I stood on that tee box, casually joking with the other three guys in our group. I was first to tee off. Figuring the hole was playing about 165, I grabbed my 8 iron, and put a picture-perfect swing on the ball. It felt good. We watched the ball fly up, tracking towards the top of the flag, and then it was gone. It felt so good, in fact, that I thought I had hit it too far and over the green – something I’ve done countless times before with the same club from the same distance. After the others hit, we headed up to the green, completely oblivious as to what lied ahead.

A quick aside – as we’re standing on the tee box, my dad is telling a story about how someone in back of him hit a deer in their car on the access road leading to the clubhouse as he was pulling in that morning. When the guy approached him to ask my dad if he had seen what had just happened, he said that it must be a sign of good luck that he hit a deer, and that the golf Gods were going to give someone a hole-in-one that day – he shared this story before we knew where my ball had landed.
When we pulled up to the green, there was only one ball on the green which I knew belonged to someone else in our group. The only indication that my ball landed on the green was a large ball mark about 10 feet past the hole. This confirmed my suspicion that I had overshot the green (or so I thought), and I grabbed my putter and wedge out of my bag and started searching in the rough for a ball. I couldn’t seem to find it and the rest of the group started looking as well. After a minute, someone said “Did you look in the hole?!” Figuring I’d never get a hole in one, it hadn’t even occurred to me to do so. “No,” I said casually. “There’s a ball in the hole!” I could hear the excitement in his voice as he, too, was beginning to process what was going on. “I got a freakin’ hole-in-one?!” I asked as I ran over to the flag. I honestly didn’t believe it. But there it was, my Titleist 3, sitting in the cup. Feel free to use your imagination and add in a splattering four-letter curse words, high-fives, hugs and loud “WHOOOO” screams immediately following the realization that I had, in fact, just gotten my first ace (I figure it was best to keep this version family-friendly). The crowd (i.e. the four of us) went wild – celebrating like we had just won the Masters.

Part of the joy of getting a hole in one is sharing the joy with others, and I couldn’t have had a better group to share it with. My father, of course, was there and able to witness something really special. I was also joined by friends John and Mike who relished in every moment with me and were more than happy to keep the celebration going on the 19th hole.

In the sprit of sharing the joy with others, it is a commonly known tradition in the golf community that when you get a hole in one, you are responsible for buying drinks for EVERYONE on the golf course time. Of course, I had the pleasure of having my big moment on the busiest day in New Haven Country Club history, which, as you can guess, meant that there were a lot of golfers on the course. Needless to say, I made some new friends that day! For now, I’ll continue to ride the high of my local celebrity and continue to enjoy the notoriety at NHCC. That is, until the bill comes in for all those drinks…

If you’re a golfer, getting a hole in one is a big deal, and something we all dream of. Many people go their entire lives without getting one, which is more the norm than the exception. According to the Professional Golfers Association (PGA), the odds of getting a hole in one are about 1:12,000 and I’m happy to say I have now beat the odds.

And in case you’re wondering, yes, I saved the ball and the card.

A fun fact – most people are aware of the golf terminology ‘Birdie’- 1 under par, ‘Eagle,’ - 2 under par and ‘Albatross’ – 3 under par. During my research about the odds of hitting a hole in one I discovered that there was a name for a shot which scores 4 under par (attainable via hole in one on a par 5 or a two on a par 6), and there have only been four of them recorded in history. It’s called a ‘Condor,’ and yes, it is a real thing. How about that for some bar trivia!