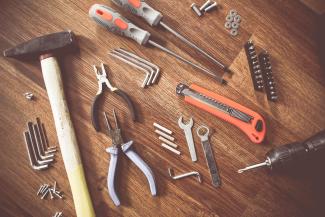 Just Buy a New One

We have all used the phrase, “just buy a new one” at one time or another when something breaks or is not working correctly. That is not a phrase spoken in my house all that often when I was a kid growing up. As a matter a fact, it was the complete opposite in my childhood household and the phrase was more, “I can fix it”.  My father was not the most patient guy but he was a mechanic by trade so he could fix anything or at least he thought he could. All he needed was a couple of screws, wood glue, WD-40, electrical tape, nails or whatever else to resurrect life into a broken item. Most times he was successful, and the item had a new life. In no way being critical of my father’s abilities, sometimes items were beyond repair and even with a gallant effort on his part, it was time to buy a new one. Those were dark days in my house.

What was interesting, even though something did not work anymore, my mother would not let my father throw it away. That mentally fostered a basement full of “somedays”. That was the label my mother gave to things that she just could not throw away. “That will be good for something someday”, she would say, hence the name. The quantity of “somedays” not only occupied the basement but also the garage, attic, the closets and cabinets as well. Fast forward decades. My mom had passed-away, and it was time for our dad to sell the house and move into something smaller and more manageable. When my brothers and I were cleaning out our childhood home, we had to deal with all the “somedays” that had been accumulating for years. We needed a dumpster. Granted, there were emotions flying around as we had all the “remember when” conversations. As we would be throwing things in the dumpster, we wondered why someone would have kept items that were broken or useless. The reason was we knew that they would be good for something someday.

That mentality had to do with being frugal and having respect for the value of a dollar. Nowadays, I certainly do not mind spending money but would do my best effort at trying to repair something before simply buying a new one. I have a little Bob Vila in me, and I take great pride when something around the house isn’t working, and I am able to fix whatever is broken. Ironically, often I am using tools that I inherited from my father. Hopefully, when I am successful repairing something, my father gives me a little wink from above. I do know my mechanical limitations and recognize when I must admit, just buy a new one. With two grandsons running around and all the toys and apparatus that we have for them, something always needs to attention, let alone the normal wear and tear of everything else around the house. Even though our home is less than 5 years old, something always seems to need “a little love”. My father taught me countless things, and one was the importance of maintenance. Tighten this, loosen that, adjust this, and lubricate that. I am always meandering around the house doing something with a screwdriver, pliers, tape measure or tool of choice in my hand.

Even though my father’s mechanical abilities were far superior to mine, I have one tool in my toolbox that gives me an advantage. It replaces countless tools and products and is safe to use. No goggles, no extension cords, no work gloves, or rags for cleanup required.

I have duct tape!