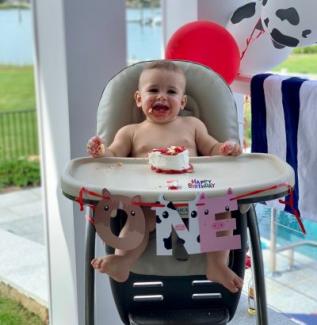 No one is more surprised than me to read the title of this article. I still have vivid memories of being in the delivery room and the overwhelming amount of anticipation that led up to the most exciting day in my life. After surviving the first year of Kyle’s life, I feel like his first birthday party was as much of a celebration for Jill and me as it was for him. It was a metaphorical pat on the back after successfully reaching the 1 year mark. I say surviving because the past 12 months have been a perpetual exercise in playing defense, with no time for offense. Both Jill and I have learned a lot in the past year, about both ourselves and being a parent. It has been the hardest yet most rewarding experience, and it has only just begun. Kyle is a very busy boy, and as he grows older and stronger, he only gets busier. I’ve been calling him Bam-Bam for the past few months because he likes to smash just about anything he can get his hands on, presumably to make the loudest possible sound. God help us once he starts walking.

We certainly don’t know where the time went, but if I had to estimate, we spent a good amount of time changing diapers, even more time feeding him and the rest of the time talking about him. What a year it has been. By the time August rolled around, we had to start thinking about how to celebrate his first birthday. Knowing Kyle likely won’t remember any of his party, we decided to keep it relatively small. That didn’t stop my mom from having a theme, of course. She went all out and turned her home into a farm. We had inflatable pigs, cows, horses, ducks and roosters. There was even a barn made out of construction paper (featured in last week’s email) in front of the fireplace. Even buddy played a role as the barnyard dog.

Thankfully the weather cooperated over Labor Day weekend and we were able to spend time outside in the pool and on the patio. Kyle wasn’t shy being the center of attention and enjoyed spending time with family and friends, always with a smile on his face. One thing we can’t argue is that he is one happy kid – which I consider to be our crowning achievement so far. Even the food was back-yard picnic themed, with pulled pork and mac and cheese for the main course. No complaints from dad!

Unfortunately, the only anticlimactic moment was when we gave Kyle his own “smash cake.” We were hoping for a YouTube worthy video of him diving in and smearing it all over himself, but instead he just stared at it, confused. He played a little with the icing but didn’t really engage with it until I broke it apart. My suspicion is that he thought it was too big to fit into his mouth and couldn’t figure out what to do with it. I’m surprised he didn’t give it a shot anyway as he’s at the stage now where everything goes in his mouth.

All around it was a great day, one we will certainly remember. My only hope is that the next year goes as smoothly as the last!