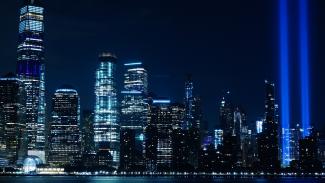 We all remember the exact moment when we first found out about the 9/11 tragedy. I know I certainly do. It is still so vivid, it’s hard to imagine that it was 20 years ago. And by many measures, I was still just a kid at that time. For those that forget how quickly things change, let me set the stage. It was a simpler time, before social media, before texts, before cell phones were an extension of our bodies. News travelled by word of mouth, not tweets, posts or live-streaming video. Sitting in my first period English class, the rest of my classmates and I were oblivious to what was going on only about 70 miles from where we sat. America was under attack, and we had no idea.

I was a freshman in high school. And when I walked out of the classroom, everything changed. The halls were buzzing. So many others, like myself, had no idea what had happened. After hearing fragments of information during the 10-minute break between classes, I was more confused than informed. I arrived at my next class a few minutes early and found my science teacher sitting silently watching the live news coverage on the classroom television. That was the first time I saw the picture of the building on fire, and it is an image that I, like most, will never forget.

For the next hour and twenty minutes, no one spoke in that room – not even our teacher. As a young teenager, it was hard to wrap my head around the magnitude of what I was witnessing. The thought of New York as a post-apocalyptic world was more science-fiction than reality. It was impossible to reconcile in my young mind. In the days and weeks that followed, I think all of America learned a little something about life and about themselves that they never thought they would.

I’ll spare you the messages of hope, progress and unity that you’ve undoubtedly seen everywhere over the past week or so. What 9/11 taught me was not that the whole can be greater than the sum of its parts (which it is), not that time will heal all wounds (which it will) and not that the collective will of our society is strong enough to create a better world, even after our darkest hour (which it did). At the time, I had more questions than answers.

What I did learn that day is how precious our time is on this earth. After watching that get stripped from thousands of Americans in the matter of seconds, it highlighted the stark reality that life is short. I’ve learned to not take things like our safety, health and well-being for granted – a realization that has been reinforced time and again, never more so than over the past year as COVID brought the world to its knees.

The result has been constant effort to bring positivity to my life and those around me. It has forced me to focus on the things I can control and do my best to prepare for the things that I can’t. I can control my attitude, how I spend my time, how hard I work and where to direct my energy. The rest, as they say, is fate. How we choose to live our lives is just that, a choice. I’m choosing to cherish it. If 9/11 taught me one thing it is that our time here is life’s greatest gift, and, as we all learned, it can be taken away in an instant.