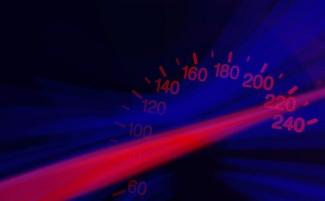 Life in the Fast Lane

Over the years while driving a vehicle, I have been accused of having a bit of a “lead foot.” That may be true but there is something about testing the capabilities of a vehicle that is exciting. There are times when excitement from events unrelated to the driving of the vehicle create the lead foot syndrome. One example of exactly that circumstance will be forever in my memory banks.

Many years ago, after playing golf and breaking 90 for my first time, the adrenaline was pumping through my veins. While driving home from the golf course that afternoon, I was going faster than I should have and a police radar trap was just waiting for me to zip through. Well my excitement from breaking 90 quickly evaporated when noticing the flashing red lights from the police car in my rear-view mirror. You know the drill, “license and registration.” While handing the documents to the officer, I asked “do you play golf?” After receiving an abrupt “no,” followed by a “please remain in the vehicle,” I knew there was a speeding ticket with my name on it coming my way. Sure enough, the officer issued me a $150 ticket.

Rather than just pay the ticket and move on because the ticket was appropriately issued, it was the extenuating circumstances that needed to be explained. Being determined to plead my case, I made the trek to traffic court in Meriden to represent myself before the prosecutor. Many others were doing the same thing that day and a long line was waiting for me. There were two prosecutors that day and one was an older woman. When my case was called, it was the other prosecutor to hear my case and he was a young man that was very athletic looking. This was the beginning of the second ironic thing to occur that day. He asked my plea and I posed the same question to him that I asked the police officer that gave me the ticket, “Do you play golf?” The prosecutor gave me a surprised look and replied, “as a matter of fact I do.” That was my cue to outline the sequence of events on the day the ticket was issued. To validate my situation, I took my United States Golf Association (USGA) handicap card from my wallet. In this era, the USGA card looked like a credit card and had your last 20 scores on a peel off sticker. As new scores were posted with the USGA, they issued a new sticker to place on your card. All the scores on the card that I showed the prosecutor were between 90-100 except for one, which was an 89. Pointing to that score in a dramatic fashion, “that is the day I received the ticket,” I exclaimed. He looked at me and smiled and said, “you can’t make that stuff up.”

Then it got funny. He then proceeded to tell me that he still longs for the day when he breaks 90 on the golf course and understands my excitement and the extenuating circumstances that resulted in me receiving the speeding ticket. He instructed me to make a check payable to the United Way for $89 and he would take the speeding ticket off my driving record. He also conveyed various warnings about driving safe and obeying the posted speed limits in the future. It was quite the experience. Not only was there a savings in what was paid from $150 to $89, but now that same $89 became a legitimate tax deduction, too!