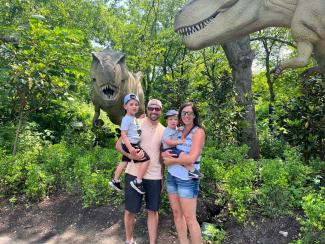 Lions and Tigers and Bears, Oh My!

There are three places that Kyle and Ryan have been asking to go for over a year. Disney world (of course), the Peabody Museum to see the dinosaur fossils (under renovations until 2023!), and the Bronx Zoo. We committed to the latter and packed up the car for a trip to NY last Monday. The ride there was exactly what you’d expect, a bit of traffic broken up by dozens of questions including ‘are we there yet!?’ about every five minutes. Interstate travel is relatively new to our kids, and the thought of going to New York was akin to going to the moon. Nonetheless, we made it. Our timing was perfect, as the zoo had a special dinosaur exhibit running through the summer which only added to the allure of what would certainly be an exciting day.

If you haven’t been to the Bronx Zoo in a while, or have never been at all, it definitely isn’t just for kids (pro tip: go on a Monday, it felt like we had the place to ourselves and the staff at the zoo confirmed it was the least busy day of the week). The zoo and its attractions are built partially through a botanical garden – which means there was plenty of shade to keep us somewhat cool on what was a hot and humid day. Stepping out of the parking lot and through the gates, it is incredibly difficult to believe that you’re in the heart of the Bronx, only a few steps from the famous Italian section of Arthur Ave and only a mile or two from Yankee Stadium and upper Manhattan. Aside from the occasional siren or car horn that could be heard in the distance – which Ryan was quite in tune to – it feels more like you’re hiking through the Catskills than in the heart of a bustling city.

With dinosaurs being all the rage in our house, the dino exhibit was the natural place to start – which of course was on the opposite side of the zoo from where we parked. Covering 265 acres, there is no shortage of opportunities to walk – my iPhone counted over 16,000 steps that day, much of that behind a stroller. As we meandered through the park, however, all that walking didn’t seem like much of a chore as it was hard not to enjoy the sheer look of amazement on both kid’s faces as we came to each new exhibit. The zoo does a great job of making many of the animals accessible, and we had the opportunity to get up close and personal with the gorillas, bison and many of the birds housed in the aviary.

A trip on the monorail to see some of the larger animals offered a welcomed break from walking and we were even lucky enough to catch one of the tigers taking an early afternoon stroll. From dinosaurs to bison, to sea lions, to anteaters, and to Komodo dragons, we covered lots of ground that day. At times it seemed as if the kids heads’ were on a swivel and they didn’t know where to look next. We arrived at the zoo around 11 and stayed virtually until it closed. I’m sure we missed something, which is a perfect catalyst to go back sooner rather than later. Most importantly, we all had a great time – Jill and I included. I had been to the zoo as a kid and ran a 5k through it several years ago, but those all seem like distant memories. This last trip served as great reminder of how lucky we are to have such an amazing place only 60 miles away. The only downside: the 2.5 hour ride home in stop-and-go traffic.