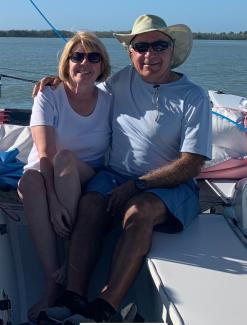 If you have ever lost any of the above items, you can surely relate to that feeling in your gut when the reality of the situation hits you square between the eyes. Several years ago, I did lose my money clip while on the beach in FL. I was angry at myself more than anything because I never should have lost the money clip because I should not have had it with me on the beach. Anyway, that is another story into itself and that is not what this story is about. I did lose my wallet when I was a kid and only lost some money and that was before credit cards, and I didn’t have a driver’s license yet. Also, I was in Boston back in my college days and lost my car keys. Fortunately, I had one of those magnetic “hide-a-key” holders under my bumper. No big deal. I never lost all three items at the same time This story is not about me, but rather someone that I was with recently who lost all these items at the same time. What a bummer for him!

I was down in Marco Island FL last month and was able to sneak in a few rounds of golf. One of those rounds of golf, I was paired with a nice man from Madison, Wisconsin. Him and his wife were doing the snowbird thing and enjoying their winters in sunny FL. We were having some great conversation between hitting golf shots and rolling putts. After about an hour or so into our round of golf, a young lady driving the courtesy cart with refreshments and snacks came by. It was too early for a beer, but a Gatorade sounded good. My new friend offered to pay for our drinks. I accepted and said I would get the next one. That is when it happened. Paul (that was his name), went into the zipper compartment in his golf bag to get some money. What would have normally been a simple process became quite frantic for Paul. He could not find his money clip, wallet, or car keys. He was trying not to panic but it was obvious to me that he was extremely upset. Meanwhile, I paid for the drinks as he continued to look through his golf bag and in all the compartments in the golf cart. Nothing could be found. I called the clubhouse from the course with my cell phone thinking maybe he left his items on the counter when he was paying his green fees. No luck.

When we made the turn after playing the front nine, Paul went into the Pro shop to see if anyone had returned his items. No luck. We did the same at the end of our round and again no luck. He left his contact information at the Pro shop hoping someone later in the day would find the items. He did not live far from the golf course so I took him home so he could get his extra set of car keys. I then brought him back to the golf course so he could bring his car home. He was so appreciative and wanted to buy me lunch, but I had plans. We swapped business cards and went on our separate ways. Later that night, I sent him an email to see if his items had been found and he replied, no luck. The next morning, I was still thinking of his situation, and I had a thought. Maybe he inadvertently dropped his items inside his golf bag, and they fell to the bottom, even though he may have thought that he put them inside the zippered compartment? I sent him another email and told him to take all his clubs out of his bag and look in the bottom of the bag. Later that night he replied. The subject line of his email was HOLY SH#T! His wallet, keys and money clip were at the bottom of his bag. He was appreciative once again that I followed up with my idea. Maybe he would have eventually found everything. Who knows?

What I do know is I made a friend on the golf course that day.