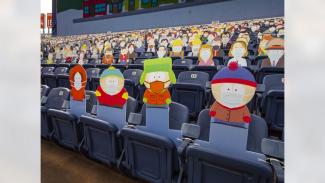 Missing the Roar of the Crowd

What we see on TV when watching a college or professional football game is generally limited to what is happening on the field. Sure, we get the commentary from the announcer’s box, but the real excitement of live sports is the off-camera antics that take place. The stuff you can’t hear or see on TV. The rowdy fans with painted chests, over-the-top costumes or those that just had a few too many drinks in the parking lot. COVID has changed the game, literally. The strangest part, in my opinion, has to be that the players are not greeted by the roar of the crowed when taking the field at the beginning of the game. There is no cheering during the last bar of the national anthem. No booing of the refs after a questionable call. No heckling of the other team. The home field advantage has been significantly diminished – much to the detriment of the players and fans alike.

Then there are the people watching on television from home that cannot marvel at the packed stadium and react to the eruption of the crowd with a good play. One announcer commented that you can hear the players and coaches communicating with each other during the game. Normally, the crowd noise would drown out the ability to communicate between the coaches on the sideline and the players on the field. Interestingly, this has led to more penalties for un-sportsmanship like conduct being levied against coaches and players because the referees can hear the nasty remarks they are making directed at the officiating staff. Then there are the cardboard cutouts of fans in the stadium seats (most creative award goes to the Denver Broncos – they put every character ever to appear in the South Park animated series in their stands – about 1,800 in total – all wearing masks, of course). It is all too weird.

The ripple effect hits the fans hardest in the pre and post-game activities, or lack thereof this year. If you have ever attended one of these events, you are aware of how much is going on in the parking lots before, during and after the games. Tailgating to many is the most enjoyable part of attending a game. It does not matter who wins or loses but it is all about what you eat and drink. There are businesses, for a price of course, that will set up a section in a parking lot for your tailgating extravaganza. Tables, chairs, tents, coolers filled with your beverages of choice and of course food, lots of food. All you do us show up. All the steps from the online ordering to game day setup provides jobs. The running of the business enterprise, the shopping for the required items, the cooking and preparation of the food and drink, the delivery and setup and then at the end of the event, the breakdown and cleanup. Of course, there are the people that have their own setups and take pride with their grilling and elaborate setting that they create. They load up their vehicle or vehicles with all the necessary tailgating equipment and supplies and off to the stadium they go.

COVID has taken countless tolls. I do not need to elaborate on those details as we are all too familiar with the impact of the virus on human life, first responders, health care workers, educational institutions from pre-school, including day-care, to colleges as well as so many businesses, both large and small. It is hard to think of some normal part of life that has not been impacted and has been reshaped to a “new normal.”  Sports of all types and at all levels has been directly impacted as well. Youth sports through high school for the most part has been cancelled, postponed or severely limited. The same goes for collegiate level sports programs. Now in the heart of football season, Saturday afternoons would have college stadiums around the country jam packed with tens of thousands of screaming fans supporting their teams. Move on to Sunday and the same could be said for the NFL. Entire industries have been built around game day at college and professional football stadiums around the country.

I can’t wait to hear and see a stadium full of screaming fans. Until that time, wear a mask, wash your hands and respect social distancing. Bring on the vaccine. Stay safe this holiday season!