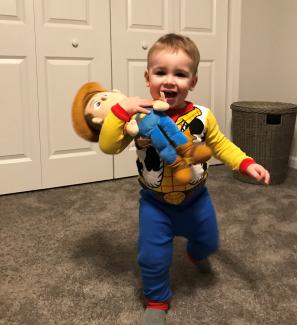 More Than Just A Toy Story

I’ve written in the past about movies that I vividly remember from my childhood and expressed my curiosity as to what movies Kyle would remember when he looks back to his. At the early stages he really didn’t have much interest in the TV and his attention span was only about 10 minutes which led him to move on to something else after a brief period of time. That is, until he met Woody, Buzz and the rest of the gang in Toy Story. He loves it. Woody and ‘B’ are now an everyday part of our lives, from action figures, to stuffed animals to PJs, they have taken over our house.

Initially, we thought it would be more of a fad and that Toy Story was just the flavor of the week. We were wrong. For the past 8 months or so, he has remained frustratingly consistent with what he wants to watch. He’ll entertain a short episode of Mickey Mouse or Sesame Street but wanders off after about 20 minutes. Same goes for other movies. But if any of the Toy Story movies are on, he’ll sit quietly and not move until the ending credits start rolling, a rarity for a child as busy as Kyle.

We got him his first Woody doll in the late fall of 2019, and surprisingly he is still in pretty good shape, complete with hat, even despite Kyle’s best attempts to dismantle him. I like to call the roughness with his toys ‘tough love’, because nearly every morning Kyle will still run to his toy box to grab either Woody or Buzz to play with. They come in the car with us, to the doctor’s office, to the store, and so on. I remind him that while he can’t bring his toys into daycare with him, that they will be waiting for him in his car seat when he gets out. When he wakes up in the morning, we can hear him playing with his stuffed animals over the baby monitor. Most of the time its ‘B!’ ‘B!’ ‘B!’ and ‘Woooy’ ‘Woooy’ ‘Woooy’, although occasionally he’ll be playing with Snoopy, his elephant and dog, all of which reside in the crib with him.

It’s amazing to watch his imagination develop, and now you can see him making the toys interact with one another when he’s playing. We’ve come miles from simply slamming one of them on the floor and yelling their name, and you can see him make the toys work together in some crazy fashion in his own little world. We’ve realized that if we found something he likes, we are going to run with it, so over the past few weeks we’ve gotten him some more items to play with, including his new PJs. His reaction was priceless when we dressed him up as Buzz and walked him in front of a mirror. It was like he saw a real-life superhero, jumping up and down, pointing at his chest saying ‘B!’ ‘B!’ ‘B!’

The hardest part about his newfound love for the movies is saying no. When he first showed some curiosity into the TV, Jill and I decided to limit the amount he can watch daily so that it was more of a treat than an expectation, something we continue to this day. Periodically, he’ll point at it and say ‘Woooy’ or ‘B!’ (or now even ‘Toy Story’) when he wants to sit down and relax. We’ll have to quickly distract him, because as many of you know, children can be persistent. In the meantime, Jill and I are fortunate that there are four Toy Story movies to choose from, which means we aren’t playing the same one over, and over, and over…