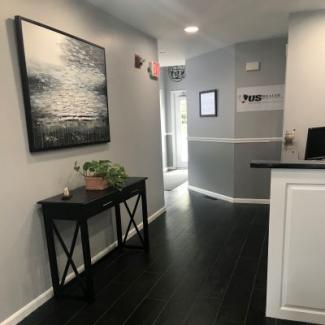 A New Home Away From Home

Over the past month or so we’ve given our office a significant face lift, which meant ‘living’ in a construction zone for a couple of weeks. Anyone that has undergone a home renovation knows that the best part about a construction project is seeing it completed, as the disruption it causes is no fun to say the least. At first things were not too bad as the wallpaper came down and the primer went onto the walls. Aside from some mild odor, it was business as usual. Then came the demolition stages.

As part of the renovation we also some removed carpet, tiled the entryway, revamped all of the lighting, removed a closet in my office, added ceiling fans and opened up a wall in our hallway. Of course, this meant painting the entire office as well. With much of the ‘dirty’ construction occurring in my office, I spent a considerable amount of time sitting out front in the reception area where I still had access to a computer setup during the renovation. I have to say, I didn’t hate sitting out front. I felt more involved in the comings and goings of people in the building, and fortunately was there to apologize to folks passing through and asking them to please excuse our mess!

The worst of it is now behind us and the dirt is all cleaned up. All that’s left are a few finishing touches such as artwork and accent furniture before we can finally say we are 100% done. We recently got the right area rugs (after returning 4 or 5) and found some comfortable chairs and a coffee table for my office. As far as wall decorations go, we still aren’t there yet. I’ll be the first to admit that I don’t have a great eye for art, and to be honest the bare walls don’t bother me all that much. The same can’t be said for both my father and mother who are constantly sending me pictures of wall art from Home Goods. I’m always on the lookout for something that catches my eye and will find something I really like in time. For now, I can live with the bare walls.

It feels good to have a new ‘home’ here, and the removal of the wallpaper and new paint job alone made a huge difference. Even more surprising than the effect of a fresh coat of paint, however, is how the new LED lights transform the office into a brighter and more vivid environment. We previously had the traditional 1990’s recessed lighting, which worked just fine for years. But as with many things in life, you don’t know what you’re missing until you’ve had it. The difference was so noticeable that we opted to install new lighting in the conference room as well, which previously just had a four-bulb light kit on the fan. The white light, as opposed to the soft yellow, creates a clean, crisp atmosphere that perfectly complements the blue/gray paint scheme we opted for.

All told, it was more than a worthwhile endeavor and we’re happy to have a new place to welcome clients and friends to for years to come. We look forward to seeing you in our new digs and welcome your feedback.