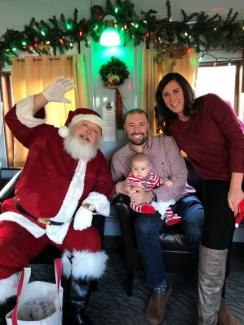 It feels like something out of a Seinfeld episode, but it seems that by having a child we have paid the price of admission to enter a sub-circle of our group of friends which only includes families with children. Social event invitations now specify whether kids are invited, and nights out typically start and end much earlier. Our most recent foray into the social life of a parent was a holiday trip on the North Pole Express. Truthfully, we didn’t know what we were getting into, especially with a newborn child. I feared that it was going to be like a packed Metro North train, only worse, with screaming children running around. I’m happy to report this was not the case.

What we learned was that each holiday season, the Essex Steam Train transforms into a winter wonderland, complete with Christmas music, elves, Mrs. Claus and of course, the big man himself, Santa. Having learned from past experiences, one of our friends suggested that this year we indulge in the ‘first class’ experience, which included a private car reserved for members of our party. This was no small feat, as coordinating the schedules of over 30 people and their children is certainly not easy. All her hard work paid off in spades as the car was set up differently than the ‘coach’ cars which gave the children more room to play and the adults some extra elbow room. Whereas the regular cars were set up like a school bus with double seats on each side, the first-class cars only had armchairs placed side-by-side. This dramatically opened up the floor space and made it much easier to move around. We also had our own dedicated staff (an elf), and more importantly, a full-service bar for the parents.

Kyle was still a bit young to have any idea what was going on, but it was exciting to see how happy all the older children were to see Santa as they danced to Christmas music in their PJs before he arrived. When he entered the car, many children ran to see him and there of course were a couple of screams to alert us all that he had arrived. After each child had their time with him, Santa made sure to come over and meet Kyle and sit for a picture with us. Although Kyle wasn’t able to tell Santa what he wants for Christmas this year, I have a sneaky suspicion that he won’t be disappointed.