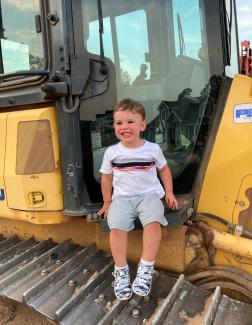 Keeping up with a growing child is impossible. They change daily, their energy levels are through the roof and the rate at which they absorb new information is simply mind warping. Over the past few months, we’ve watched Kyle’s vocabulary expand exponentially. Even more impressive is how quickly he is increasing his ability to comprehend more complex sentences and string together meaningful sets of words. This phenomenon is both amazing and troublesome at the same time, as we’ve learned over the past few weeks. For those of you that have seen the movie ‘Meet the Fockers’ with Ben Stiller and Robert DeNiro, you know what I’m talking about.

While crude language is not part of the everyday vocabulary in our house, slip ups definitely occur, and the fact that Kyle is home pretty much 24/7 makes it even more challenging for a naughty word to go undetected. For the first 32 years of my life, this wasn’t really an issue as virgin ears were never listening (or were too young to know what has been going on), but that has now changed. We may not cry over spilled milk, but when a full bottle hits the floor and spills everywhere, an inevitable “Oh ____!” comes out (you can use your imagination). It happens so quick that, as an adult, we don’t even realize what we’ve said. We clean it up and move on and never really think about it again.

Unfortunately, it seems that these moments are far more meaningful to Kyle as his ears perk up at the sound of distress and he starts to listen intently. Even scarier is his propensity to repeat what he’s heard, especially when he hears words or phrases that are accompanied by a physical reaction, at a loud volume or are repeated. One of his favorite phrases was ‘Oh no!,’ when pretty much anything happened. For a few days, that was replaced with a much less favorable ‘Oh _____!’ Fortunately, we’ve been able to strike that word from his vocabulary, at least temporarily.

As a parent, you know its wrong and are terrified that your child is going to drop an S bomb or an F bomb at exactly the wrong time. But there is a comedic aspect when this happens that is hard to deny. I feel like a bad parent when I have to turn my head and laugh when Kyle says something he shouldn’t, but his innocence and lack of understanding of social norms makes his expression of a bad word hysterical.

We want to raise Kyle (and Ryan) as gentlemen, which means hard work ahead for both mom and dad. As both boys become more acutely aware of what is being said around them and what our actions and words mean, the challenge is only going to get tougher. I’d love to think that we won’t screw up, but I’ve accepted the fact that we will. Just the other day, Kyle was at my parent’s house saying ‘Daddy a--- h---!’ (told ya there’d be a Meet the Fockers reference). Now I wonder what I did to deserve being called that!? Guess we’ll have to ask Jill to find out!