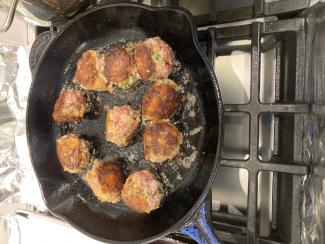 In Pursuit of Perfection

We all know that cooking is an art, not a science. It’s why recipes passed down from generation to generation are never quite the same. Those who have religiously watched Everybody Loves Raymond may remember an episode where Marie gives Deborah her recipes as a gift. She also gives her a box of spices that have been intentionally mislabeled so that the finished product doesn’t taste nearly as good as her own – of course to ensure that Raymond remains loyal to her cooking. Some will find this story line incredibly relatable, others, not so much.

Especially in Italian culture, your mother or grandmother’s recipes may be arguably more valuable than even an engagement ring. However, simply following the recipe in front of you will never get you close to the desired result when it comes time to eat. To start, measurements are far from precise. They are often cited in terms such as ‘a pinch of this’ or a ‘dash of that.’ If it says ‘salt to taste’ – forget it! You’ll never get it just right. Then there’s the timing aspect, which is equally as ambiguous. ‘Brown the meat,’ ‘simmer until reduced by half,’ or ‘bake until done’ are things that can only be taught, not interpreted.

Which brings me to the point of my story. For the past several years, I’ve been working on perfecting my recipe for meatballs. One would think that taking on such a classic dish would be easy, but I can promise you it is not. I’ve tried dozens of iterations and am getting incrementally closer to what I believe will ultimately be the perfect meatball – at least for my palate (just like with wine, there are different strokes for different folks). I’ve tried some with pignoli nuts, others with mozzarella, some with parsley, others with oregano, some with onion, some without, some with bread, others with bread crumbs. I’ve cooked them in the oven, a nonstick pan and a cast iron skillet. It is definitely a labor of love.

It’s been a work in process for years, and Jill has stood by me through good meatballs and bad (of which there hasn’t been many, thankfully!). The first solid food Kyle ever ate was a meatball, and he is my toughest critic to this day. In fact, he recently said ‘Daddy, these are delicious’ after trying my last batch. Count that as a win for me! But I know they could be better…

I’m confident I’ve nailed down a key part to the meatball – the bread to meat ratio – which gives it the perfect amount of lightness and flavor. I’ve also mastered the cooking process and have solidified the cast iron skillet as my preferred method, even though it makes a mess. But the nuances of seasoning, garlic and herbs have yet to be perfected – and it is in this mix that the magic truly happens. I can assure you, I’m close, and I’m now in the outer ring of the bullseye, but haven’t hit the mark just yet. Fortunately, it is a fun (and delicious) process of trial and error.

Fun fact - the worst meatball I ever made was when I mixed up parsley and cilantro. Those were close to un-edible!