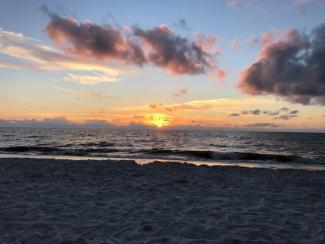 On The Road Again

I write this on October 24, 2021, while cruising along at 35,000 feet above sea level for the first time since February of 2020. That timeframe is the longest stretch without flying in my adult lifetime. While flying is not my favorite thing to do, it is a necessary evil to get from point A to point B. That holds especially true when points A and B are thousands of miles apart from each other. This “maiden voyage” takes me from Bradley Field to warm and sunny Tampa Florida in route to Naples. The weather in CT has been spectacular by October standards but even though it has been nice in CT the weather in Florida is nicer or at least warmer. Also, regardless how nice the weather is in the Nutmeg State, and how beautiful the foliage is this time of year, Florida has palm trees. I love palm trees.

Having done the CT to FL trip countless times over the last 20 years, the process became somewhat routine. Hartford has been my airport of departure for FL flights. If venturing to the west coast or going “across the pond”, inevitably the departure would be from New York. When going to FL, based on flight selections, the rotation was between Tampa and Fort Meyers. The key to the flights was it had to be nonstop. Between those two airports, there were always several nonstop selections to choose from and whichever had the best times of departure and arrival would determine the route. Fort Myers was the definite preference because it was smaller and more convenient than Tampa, but Tampa was always in the mix.

How times have changed. Post COVID, for this trip, there were no nonstop flights from Bradley to Fort Meyers on Southwest, Jet Blue and Delta. Seeing that the destination was Naples, Fort Meyers was the obvious choice over Tampa. Not one nonstop flight to Fort Meyers. It boggled my mind. There were flights available but with connections and that was not appealing at all. The best travel time with a connection was about 8 hours. Really? So instead, I opted to fly to Tampa on Jet Blue (the only airline offering this option) and drive to Naples. Doing so, saves over three hours of travel time. I would rather be driving in a vehicle instead of sitting in an airport waiting for a connection worrying if my luggage finds its way to the end destination.

I so look forward to Avelo airlines flying from Tweed to most of the major Florida airports starting in November. Cathy and I have a winter trip to Marco Island, Florida on the calendar. I already have seen Avelo has non top flights from Tweed to Fort Meyers. The fare is $103 per person round trip. That is crazy cheap. Who cares if they charge for a carry on and checked luggage? I can leave my house about an hour before departure and get to Tweed in plenty of time to catch the flight. It is too early to say but rest assured once we have an Avelo flight under our belts, I will write to share the experience. Hopefully it will be a good one. More on that sometime in the future.

For the time being, I am eating my peanuts and awaiting our initial decent into Tampa. Then off to the luggage carousel and on to Enterprise to get a vehicle for the three-hour drive to Naples. Also, thinking about exiting the airport and seeing some palm trees again. Did I mention I love palm trees? A week with my bride of dining, walking the beach and possibly even enjoying a cocktail or two. Life is Good!

It has been long overdue, and it is good to be “on the road again”.