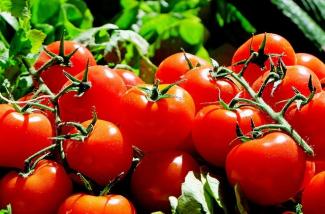 There is no food more important to an Italian than their mom’s tomato sauce and I’m certainly no exception to that statement. During my childhood, we didn’t go to the store, buy some canned tomatoes, simmer them with some salt, herbs and spices and dump it over spaghetti. The actual making of the sauce was an event. It all started with the bottling of fresh, crushed tomatoes. Let me back up a bit. My Uncle Fred had the garden of all gardens. There were rows and rows of every vegetable and herb one could imagine. The garden was his labor of love. As a kid, whenever we went to my aunt and uncle’s house, which was often, Uncle Fred would be in the yard doing something. He was either pruning one of the many fruit trees, picking strawberries or grapes or tending to the garden. Most often, he was in the garden. Come harvest time, everyone shared in the fruits of his labor, including my family.

Back to the crushed tomatoes. A section of his garden had tomatoes that were specifically for tomato sauce. It was a family affair when it was time to crush tomatoes. My uncle was the boss when it came to the garden, but it was my Auntie Ida, my mom’s sister, that took the lead when it came time to crushing and bottling the tomatoes. She was a master and she took control. It was a production line that happened in the basement of their house. My uncle had the bushels of fresh tomatoes all lined up against one wall. My aunts washed out the quart sized bottles, the same ones that were used over the past year and filled up each year before that. The tomato crusher was mounted to the work bench with the cleaned bottles near by in crates. At the other end of the work bench was the bottle capping machine. When Ida was happy with the setup, and all hands were on deck, she would give the go ahead to proceed.

As a kid, it was amazing to watch the process. It was something that Henry Ford would be impressed by. My uncle would lift the bushels of tomatoes and pour them into the crusher. My mom or one of my aunts would be turning the handle on the crushing machine. Someone else would be catching the tomato mush in one of the empty bottles and placing the bottle, once filled, on the bench.  The smell of fresh tomatoes filled the room. It was wonderful. Then came my part of the assembly line, capping the bottles. My role was to take each bottle and placing it in the capping machine. I would reach into a box of unused caps and place into onto the top of the bottle and press firmly down on the handle sealing the bottle to keep the contents fresh. Prior to sealing the jar, there was one key step that needed to be complete, and Ida was always watching to make sure I didn’t forget it. I would place a fresh basil leaf (freshly picked from the garden just moments before) into the neck of the bottle which helped create a fresh flavor profile for the canned tomatoes as they sat. Once capped I would take the bottle and place it into one of the empty boxes on the other wall. As the boxes were filled, I would move them to another section of the basement where all the other canned and bottled “stuff” was stored. As a ‘thank you’ for our service, a box or two of the crushed tomatoes made their back to our house  where they were placed carefully in our special storage closet reserved just for the canned tomatoes. It was an Italian thing.

When it was time to make sauce, my mom would send me downstairs to get some bottles. She would pop off the cap and check for the basil leaf and would smile in approval knowing that my hands placed the leaf there. Mom would simmer the crushed tomatoes and add the pork, sausage and beef and the oregano and garlic and a pinch of sugar and work her magic. When we would be eating the pasta with the fresh sauce, I would envision the entire tomato crushing and bottling process and could only smile.
The best part, my mom would hunt through the sauce for the shriveled basil leaf to put on my plate. You can’t make this stuff up!