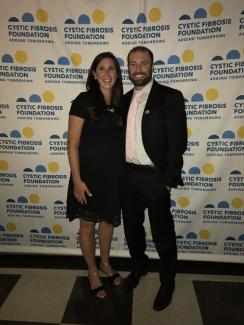 Supporting the Cause: Cystic Fibrosis

I’ve learned a lot about Cystic Fibrosis (CF) over the past couple of months, which is kind of odd seeing as I don’t have a direct connection to someone that suffers from the disease. Through my network of friends and colleagues, I became involved with the New Haven’s Finest program, sponsored by the Cystic Fibrosis Foundation that recognizes professionals in the local area for outstanding achievements. Working with the organization, I not only learned more than I ever thought I would about CF and how it affects the day-to-day lives of those that live with it, but I also had the opportunity to meet people that suffer from CF, tour the Yale Cystic Fibrosis Research Lab and meet those that are passionately involved with the Foundation itself.

Before deciding to work with the group on the 2018 New Haven’s Finest campaign, I wanted to make sure that the organization had a reputation of doing the right thing. Unfortunately, it is all too common to see ‘pay to play’ type schemes that involves sending you a plaque, putting your name in a magazine and giving you a press release, all for a small fee. I did my research and connected with others who had been involved with the Finest program in past years. After talking to several people, I had received nothing but great feedback and soon learned that many of the past honorees have even elected to stay involved with the local chapter of the Cystic Fibrosis Foundation and have helped to run and expand future Finest programs. I was happy to have an opportunity to work with a genuine group of people looking to help those that are burdened by living with CF.

Over a couple of months, those involved with the Finest program had the opportunity to get to know each other, do some networking and develop strategies to raise money for the Foundation as a team. There was immediately a strong connection within the group and the board members were so engaged that it was hard not to enjoy myself. I felt that I was in good company throughout the process and met several people whom I’m sure I’ll keep in touch with. The program concluded in mid-July with a gala-type event held at the New Haven Lawn Club, which was incredibly well done. Complete with a full dinner, DJ and open bar, the board (and Lawn Club) far exceeded any of my expectations.

As a whole, the 2018 group of honorees raised over $55,000, more than any previous class in New Haven. This includes money raised individually, as well as proceeds from the silent and live auctions which were held at the honoree event. With such an engaged group, the event (270 people) sold out in record time, and there were unfortunately many people (myself included) who were not able bring all the friends and family that they would have liked. Maybe next year!

One of the things I enjoyed most about my involvement with the Foundation was being able to raise money for such a worthy cause, and I want to thank everyone that made donations to support CF research. Your donations and help spreading awareness was invaluable to our success and gets us one step closer to finding a cure to CF. It was an overwhelmingly positive experience, one I hope I can share with others in the future. I plan to remain involved with future Finest programs as I now can see the good we were able to do together. Again, none of this would be possible without the generosity and caring nature of the people I am lucky to have in my life and it continues to remind me just how fortunate I am to know all of you.