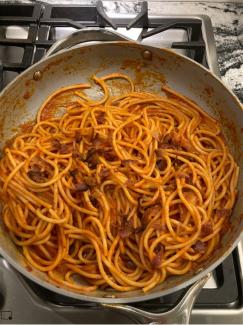 A Taste of Italy

It’s easy to get stuck in a rut when it comes to planning weekly dinners, which is a trap we’ve fallen into numerous times. The same dishes that were once something new and exciting become routine at best. We are all creatures of habit, and when you throw two working parents and two very active kids into the mix, convenience and predictability often trump adventurous and excitement when it comes to meals. Once in a great while, Jill or I will stumble on a recipe that appears too good not to make. Unfortunately, they are often complicated, involve exotic ingredients or just simply take too much time to make. The result being that the meal (usually cooked with a child hanging off your leg) just doesn’t live up to what you had envisioned it to be in your head. Such was not the case this last time around, when I found a recipe for Bucatini Amatriciana, a Roman pasta dish that I’ve dreamed about since I was in Italy.

Anyone that has eaten their way through Italy knows there is a certain delicateness to ‘real’ Italian food that doesn’t exist in the Italian-American food we often see here in the states. The chicken parm, spaghetti and meatballs, etc. that are staples on most Italian restaurant menus simply don’t exist at restaurants overseas. Similar to how you would only get blue crabs in Baltimore, a cheesesteak in Philly or (most importantly!) pizza in New Haven, you can’t get a truly authentic amatriciana outside of the Italian region of Lazio (which includes the city of Rome).

As with any amazing meal, it all starts with the ingredients – incredibly fresh, organic and vibrant in color and flavor – most Italians already have a leg up on the mass distributed produce we traditionally get here in America. The local farm market has it all: tomatoes are so flavorful you’d be inclined to eat them like an apple; eggs where the yolk is more orange than yellow; seafood that was pulled out of the Mediterranean that morning; the list goes on. But I digress…

I’ve always said that there is an art in simplicity, and there are several Roman pasta dishes that embody that concept. My favorite is the amatriciana. Traditionally made with bucatini pasta (a think spaghetti with a hole in the middle), it blends the freshness of tomatoes with the fat of pork and the spice of dried chilies into one delectable dish that makes me salivate just thinking about it. So, when I stumbled on a recipe from the nationally acclaimed restaurant Lilia (located in Brooklyn, NY), I just had to try it (excuse the very millennial comment – but their Instagram page has some of the most drool-worthy food pictures I’ve ever seen). The best part – it only has 4 ingredients.

For those without access to an Italian grocery store, sourcing these ingredients may come as a bit of a challenge. And as I mentioned earlier, there really isn’t a substitute for some of them. Most notable is the pork cheek, or guanciale, as it is known in Italian, which is an incredibly fatty piece of meat that is the centerpiece to the dish. The fat renders down and creates a base to the sauce that cannot be replicated with other cuts of meat, including pancetta, which many US restaurants use as a substitute for the guanciale. Fortunately, New Haven County has its share of specialty Italian grocery stores (Liuzzi in North Haven is a fan favorite in our office) and I was able to pick up the guanciale and tomato passata (a special variety of strained tomato puree) without issue.

The prep was virtually nonexistent, and the cooking process was rather simple. You may be wondering what it tasted like. Needless to say, I wouldn’t have written the past 5 paragraphs if the end result wasn’t absolutely delicious. Quality ingredients were key, and the pasta was cooked perfectly al dente. Jill and I ate an embarrassing amount the night I made it (note the serving size of 4-6 people…) and are already talking about making it again. I suggest you give it a shot, too.

The article and recipe can be found here: Click here for article.

In case you’re wondering where you may be able to eat a comparably good dish locally, I’d suggest the following: