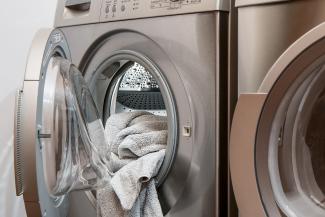 I think I speak for most consumers when I say I just want things to work. I may be in the minority here, but I have always measured the quality of an item based upon how long it functions as intended – not how many cool buttons it has. Household appliances are the prime example of where features have trumped quality for years now, and us as consumers have simply had to deal with the consequences. When I was buying our washer/dryer, the salesperson told us that all the new units should be considered ‘disposable’ after about 5 years – at which point the electronics will inevitably wear out and it will be cheaper to replace than fix – conveniently after the warranty period ends. While I’m sure he was joking to some degree, he isn’t wrong.

In my last house, we had an old Maytag washer and dryer that were (without exaggeration) older than me. Their build date was 1984. They weren’t great to look at, didn’t have any fancy features, and probably weren’t the most energy efficient. The dials made that rough grinding sound when you turned them and there was no pleasant ‘chime’ when the clothes were done, but instead an abrupt and harsh buzzing sound. Like I said, it was nothing sexy, but they worked unquestionably (at least I assume) for over 30 years. We’ve all heard the saying ‘they don’t make ‘em like they used to,’ and I can’t think of a better application than here.

Talk to any of your friends, and I would be willing to bet that each and every one of them has a brand of appliance that they hate based upon a bad experience (mine is Frigidaire – remember when my oven caught on fire and nearly burned my house down on Christmas!?). Everyone has an opinion. Samsung, LG, GE, it doesn’t matter. Over time, metal parts have been swapped out in favor of plastic, electronic panels have replaced actual push buttons and dials, and wifi connectivity seems to be integrated into virtually everything. To make matters worse, most manufacturers likely source their parts from the same exact suppliers as their competitors.

I’m not sure if it is a (successful) marketing gimmick or a function of consumer demand. Or maybe, manufacturers are masking a deterioration in quality with ‘features’ that are largely unused by the consumer base. Ask yourself this – how many times have you used any settings on your washing machine other than ‘normal,’ ‘delicates,’ or (maybe when you wash your comforter) ‘heavy duty.’ I’d also be willing to bet that there are no less than 6-10 other types of operation modes that you can use. But do you need them, likely not? Heck, if I can barely separate clothes into lights and darks, there is no way I’m going through a menu of 15 different wash functions to figure out the optimal wash cycle!

While this all may have been more of a rant than anything, it brings me to a salient point. I’ve never heard someone rave about how much they love their new dryer or how much their water bill has gone down since they got a new washing machine. But rest assure, the minute the machine breaks, they will tell 10 people about how they have only owned it 2 years and how bad the customer service is when they called to get it fixed. Maybe it’s reality, but I’d call it a sad reality.