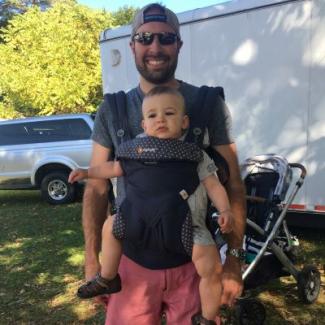 A Trip To The Fair

My experience attending town or county fairs is limited to going to the North Haven Fair as a teenager. Growing up, we didn’t make annual trips to the Big E or even venture one town over to North Branford for the potato and corn festival. With fall rolling in and in our effort to enjoy some of the spectacular weather we’ve been having, Jill and I loaded up the car and headed to the Durham fair with Kyle. As many of you know, there is no such thing as travelling light with a one year old and it gave me anxiety thinking of how much stuff I was going to be schlepping around the fairgrounds. At one point I must have looked overwhelmed as a fellow parent commented on our state of disarray and quickly reminded me in passing, ‘It only gets worse, buddy.’

It’s an especially busy time travelling with Kyle as he has been walking now for about 2-3 weeks and is sure-footed enough to easily get up and walk on his own, but often finds himself face first in the ground with a small misstep. Even more challenging is that he wants to walk at times, and lets you know it by squirming and yelling. Take him out of the stroller and he is off on two feet with a smile on his face, often laughing or babbling in his own language. While this is cute at home, it’s a challenge at a crowded fair. Luckily, we had an extra couple of sets of hands as my friend met us there with her boyfriend, so we had Kyle outnumbered 4-1. Still, that little guy kept us on his toes!

Once we settled in, Kyle had a blast and it was cool to go to a fair for the first time in decades. We are at the stage now where many of the books involve animals and flows or plans (and if you remember, about a month ago we celebrated Kyle’s first birthday with a farm-themed party). This made the many animal and plant exhibits at the Durham fair especially relevant as you can get up-close and personal with the cows, chickens, pigs, etc.… all key characters in many of the books we (repeatedly) read to Kyle.

As soon as we walked into the barn with all the cows, Kyle started pointing and yelling ‘mooooo!’ Thankfully he was strapped in to the carriage or he likely would have run after the cow and jumped on its back. He thought it was hysterical to watch the cows eating their hay or to watch us feed the llama and really wanted to get his hands on the alpaca. Seeing how much he enjoyed the animals made me forget about the carriage loaded with crap, the diaper bag, water, food and clothes that we were carrying around with us. It was a great day and certainly one for the memory books. My only complaint – I could have used a cold beer while we were outside sweating in the sun!