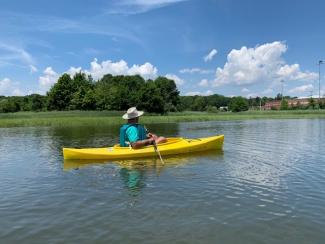 I have always enjoyed anything to do with being on, in or near the water. Kayaking is one example of being on and in the water at the same time. The Branford shoreline offers so many different opportunities for kayaking. There are the Thimble Islands, just about anywhere along the coastline but my favorite area to explore is the Branford River. One aspect of saltwater exploration is being aware of the changing tides. Certain areas are not accessible when the tide is low so having a tidal chart is a must. Not only the depth of the water needs to be considered but also knowing if the tide is coming in or going out is very important. It is much harder to paddle against a changing tide than it is to ride along with the current that is going in the same direction.

My brother in law Rick and I had planned an afternoon kayak trip on the Branford River. We scheduled our trip on a day when high tide was at 12:30 PM. I picked up some sandwiches at the local deli late that morning and with some bottled waters and a little cooler we were ready to go. We applied sunscreen, donned our hats and sunglasses and had the kayaks in the water at about 11:30. We went with the current inland. Along the way we saw countless boats of all shapes and sizes. There were some majestic homes and condos on the banks of the river on both sides. We shared the waterways with yachts, power boats, jet skis and of course other kayakers. We stopped for a lunch break about the same time as the tide crested at its high point.

After our quick lunch stop, we were back in the water and went further inland. The further we went the narrower the River became. Also, as we passed under the first of three bridges, we left power boats and marinas behind us. It was very tranquil. We saw numerous osprey nests along the way as well as many ospreys in flight. We saw egrets and cormorants as well. There were some beautiful homes nestled along the river and people waved and talked to us as we paddled by. It was a warm and sunny day, light winds, blue sky with occasional cloud cover. The conditions were perfect. We were aware of the change in the tide direction and decided we would turn around and start to head back. At this point we had been in the water close to two hours and knew we had a long paddle back. As we made our way along the meandering River, we were enjoying an outgoing tide. There were times when the current was so strong, paddling was more of an option than a necessity. This was welcome because, truth be told I was getting a little tired. We were at a point where we knew we still had about another hour, so we stopped along the bank of the river to stretch our legs for 5 minutes. We were soon back in the kayaks and attacking the last leg of our journey. We were on the river for 3 1/2 hours all together. It was a wonderful afternoon and we had some great conversation along the way as well.

Thanks Rick, for sharing your afternoon with me and I look forward to our next adventure. Next time I will come your way to explore your favorite spot. Tides will not be an issue because we will be on a lake.

Until the Next Tom’s Take...