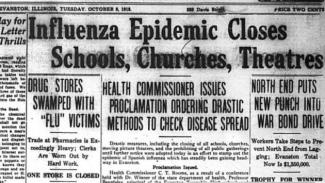 Just over a month ago, things felt really bad - to put it bluntly - and it seemed that there was no coming back from where we were. Anxiety and fear were rampant, and many people were nothing short of freaked out. COVID case counts and death rates were skyrocketing, financial markets were melting down and jobs were vaporizing in just about every industry as a global lockdown was put in place. Those preaching the next apocalypse certainly had a valid argument.

Many have heard the phrase ‘history may not repeat itself, but it certainly rhymes.’ During these past few weeks, I’ve found solace as a student of our world history and the incredible parallel we are seeing between the COVID-19 crisis of 2020 and the Spanish Flu of 1918. Fortunately, history has not yet repeated itself verbatim, as the Spanish Flu was far, far more deadly, causing an estimated 50 million deaths worldwide. It sparked complete pandemonium and brought the global economy to a standstill… starting to sound familiar?

The irony in this comparison, however, is that even despite over 100 years of industrial, technological, medical and pharmaceutical innovation, the practical measures used to combat the spread of the Coronavirus today are nearly identical to the measures implemented by world leaders over a century ago. Sure, we have better communication, real time data and a more robust healthcare system, but it still appears there is just no substitute for social distancing measures, good hygiene and showing a basic level of respect for one another. I guess the 100-year-old playbook still works?!

The swift and expansive global response has given the word ‘unprecedented’ yet another moment in the sun. I’ve heard it used recently to describe everything from financial markets, to unemployment statistics to lack of toilet paper at the grocery store. I wasn’t around in 1918, but I’m sure this was also the case back then, too. Unprecedented has become the de facto word of the pandemic, casually thrown around at the dinner table, in the media and by anyone else desperately searching for a way to describe what they have been experiencing over the past few months. The thought of wearing masks in public, homeschooling children and living in fear seems like something more destined for a Hollywood production set than at the heart of the American household. But, alas, here we are.

Fortunately, there is a precedent for what is happing today, set in 1918, and it tells us that the future is bright. As Thomas Fuller so famously said, ‘the darkest hour of the night comes just before dawn.’ While it's clear that we are not out of the woods just yet, there is reason to be optimistic. Once fears of the Spanish Flu began to subside in 1919, the stage was set for one of the most prosperous and vibrant decades in recorded history – the Roaring Twenties.

The rapid economic and industrial expansion of the ‘20s was just one of the many storylines that you could follow from that era. Perhaps an even more interesting one is of the colorful social backdrop that was painted in the years following the flu pandemic, one that helped reshape the American culture and established it as a world leader in music, the arts and entertainment. A quick Google of the era will reveal an archive of thousands of images of packed bars, speakeasies, factories, theaters, churches and schools. The ‘Jazz Age’ became so famous that it was eventually highlighted in some of the greatest works of American literature and is credited with building the foundation of the entertainment industry as we know it today.  Even prohibition couldn’t stop the social scene from exploding, and in a few short years, the horrors of the flu epidemic were reduced to text in a history book.

Even with its many flaws, society has an incredible ability to adapt to change – in fact, I’d argue that change is one of the only constants in history. What we’ve learned in the matter of only weeks has been nothing short of amazing, and I firmly believe our world will ultimately be a better place because of it. One day, this too, will become another chapter in our country’s storied history, just like the Spanish Flu, the world wars and the many other painful memories that have served as valuable turning points in path that has led to American being the greatest and most powerful nation in the world. How we respond now matters, and as we each continue to care for the health and well-being of our friends, family and communities, we are one step closer to the edge of the woods.

So, is this really all unprecedented? Maybe? Maybe not? Only history will be able to tell us for sure.