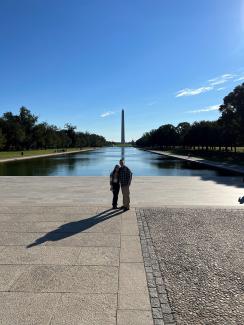 As a kid growing up in the United States, I had heard/learned quite a bit about our capital city, Washington D.C., in school. I knew that it was named after George Washington, home to the U.S. government, the white house and sits on the Potomac River but I knew very little about the real Washington, DC, until I recently visited and spent a weekend being a tourist. The district is home to a lot of government-y types and even more history, but there is so much more to it.

This was my first time visiting the capital city and definitely won’t be my last. We could not have asked for better weather for early October. No rain, sunny skies and a light breeze that kept us cool with temps around 65. Given we only had 3 days in the city, we had to spend our time wisely and take the time planning our trip this way we’re not going back and forth, instead, following a path. Since there is so much to do and see, we had to choose what we wanted to see most and what museums required tickets versus just walking in.

The drive to DC on Friday was anything but short, we were able to leave at a reasonable time but with the holiday weekend and it being a Friday, we expected traffic and sure enough, got it. What should be about a 6-hour adventure, took over 8. Either way, we pulled into our hotel around 9pm and were in bed by 10 as we knew the next two days would be exhausting. Saturday morning, we took an uber from our hotel to the Lincoln memorial. The Lincoln memorial is just to the right of the Potomac River, and we had planned to walk from there, all the way right to the United States Capitol and stopping at many museums and memorials in between. They call this the “national mall”, stretching just over 2 miles long and probably the most famous part of the city (well, maybe other than the White House).

Our trek began at the Lincoln memorial, where we walked up the 58 steps from the chamber to the plaza level. Inside, a very large statue of Abraham Lincoln, which was way cooler than it sounds. From here we walked down the side of the reflecting pool and to the WW II memorial where there are two victory pavilions, huge bronze sculptures of eagles and a pool. From there, we passed the Washington Monument, walked through the museum of Natural History, and saw the Martin Luther King Jr. Memorial. We had 12:30 tickets to walk through the National Archives Museum, home to the Declaration of Independence, Constitution and Bill of Rights. I couldn’t help but replay scenes from National Treasure during my walk through. From here we walked past the capitol reflecting pool and up to the United States Capitol Building. Which, you do not realize how large this building is until you see it in person. The rest of Saturday was spent at the Library of Congress (the largest library in the world) and the Spy Museum.

The Spy Museum is home to many artifacts used by government spies for hundreds of years. As we walked through, we learned many interesting facts about the Osama Bin Laden search, James Bond Aston Martin, the history of spy gear and the technological advances – pros and cons to the government related to technology.

Sunday, we spent our day on the other side of the Potomac River where we saw the US Marine Corps memorial and spent many hours at the Arlington National Cemetery. At the cemetery we took a trolley around, seeing many gravestones including George Marshall, Walter Reed, John F. Kennedy, William Taft, and many more. We made our way up the Tomb of the unknown to watch the changing of the guards, which happens every hour on the hour during October. After Arlington, we spent the next few hours at the Holocaust Museum.

Monday morning, we headed over to Fords Theater, the site of President Lincolns assassination. We walked across the street to the Petersen House where Lincoln would pass away, 9 hours after he was shot. We then drove home, this time much closer to the 6 hours it should take.

Although short, our weekend in DC was well planned and very much fun.