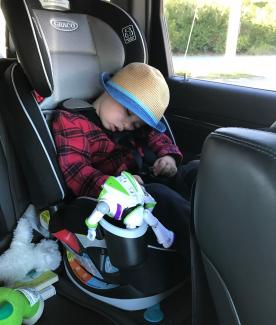 Over a recent conversation with friends, we shared some laughs about how much has changed from the days when we were kids, specifically related to the the various devices that parents today ‘need’ to transport, hold or soothe their child. We were not referring to the advancements in technology, the internet, cell phones or social media. What we were talking about was the myriad of safety precautions that are designed to protect children from any possible bumps, bruises or scratches, whether in transit from point A to point B or even when peacefully sleeping in their crib.

Children’s car seats today amaze me. There are different types based on the weight of the child. For the infants and toddlers there are the two-piece car seat consisting of a base unit and the car seat itself. The base unit stays strapped in the vehicle and the car seat section snaps in and out of the base unit. This, of course, is part of a larger ecosystem that includes a stroller and bassinet as well. As the child gets bigger and out grows the two-piece unit, it is replaced by a larger a one-piece unit that can be adjusted in numerous positions as the child continues to grow. When we were kids, we had a one size fits all, molded plastic seat. No frills. While the car seats have come a long way over time, we laughed most about seatbelts.

Nowadays if you are pulled over by a police officer while driving and you are not wearing a seat belt, you can be issued a ticket. As a kid, it was a totally different story. What seatbelts? It was not uncommon for cars to not have seat belts at all, and if they did, they had probably been tucked them down between the seat cushions to get them out of the way. You buckled them together before you slid them down the seat to disengage the indicator light or warning chime about the seatbelts. They were constricting and wrinkled our clothes. What a pain.

Eventually the shoulder strap combined with the seat belt came to be. As kids, not only were we not “strapped in,” but we were able to climb over the seats to the back of the station wagon, while the vehicle was moving. The back of the station wagon was a play area. We would have wrestling matches and move around however we wanted. Even on a mini road trip to wherever, the back window in the tail gate would be rolled down and we would make faces at the driver of the car following us along on the road. Ironically, there were probably some bumps and bruises that we received when my dad had to stop short or swerve for some reason and we were thrown around the vehicle.

It‘s not that our parents did not love us or care about our safety. It was just the way it was back then, and we did not know any better. Imagine allowing your child to freely climb around the vehicle, over the seats, into the back of the station wagon? Or having a large open back window where the child could easily fall out of the moving vehicle? You probably would be arrested on the spot for child abuse and the vehicle would get impounded and towed away.

Nonetheless, we all turned out ok, right?