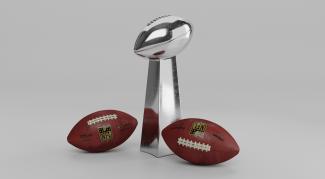 What a Wild NFL Season

With the NFL season coming down to the home stretch, now seems like a good time to talk about how wild of a season it has been. For those of you who are football fans or have been following along this season, you can probably agree that this season has been an interesting one. There have been huge pendulum swings, several teams are really up or really down and every week there seem to be major upsets, I’m sure a frustrating year for the betting man.

The Commanders who started the year 1-4, are now 7-5-1 and on the other hand, the Giants who started the year 6-1, are now 7-5-1 and that is in one division! How about the 2022 super bowl champions; the Los Angeles Rams being tied for the fourth worst record in the league at 4-9 and losing six straight games or the Vikings being 10-3 yet have a negative scoring differential. One of the leagues most premier running backs, Christian McCaffrey being traded mid season to a Super Bowl contending team in the 49ers and a Tom Brady led team having a serious chance at not making the playoffs, the first time since 2002. You get my point, if these don’t scream crazy; I’m not sure what does.

I am a Green Bay Packers fan, weird, I know. I was born in Ohio, have family that live there, like Ohio State college sports, yet am a Boston fan in every other aspect, but I like the Green Bay Packers. When I was a young boy, I was watching a football game as a fan of no one and saw Packers fans wearing cheese heads, which turned me on and here I am today, one wearing a cheese head every Sunday. While I have had my fair share of successful seasons yet only one Super Bowl in my lifetime, this year has been quite rough. Aaron Rodgers doesn’t look like the four-time and back-to-back MVP that he is.

Either way, this football season has been a fun one and I wouldn’t want it any other way. My Sundays are typically filled with wings, chips and dip and many other football snacks while I sit on the couch, with my cheese head on rooting for the Packers. Then my Monday morning is typically filled with conversations with Paul debriefing on what we watched the previous day. Sprinkle in fantasy football, an annual tradition with my friends and football season is one of my favorite times of the year.

In years past we have received the benefit of watching 9:30am games due to the NFL playing games internationally, which they continued this year. Three games were played in London, one game in Mexico and for the first time ever; an NFL game was played in Munich Germany. For me, this is exciting for two reasons. One, the NFL is expanding its fan base and slowly becoming a sport with fans all over the world and two, my NFL Sundays suddenly became four hours longer!

I look forward to seeing what the rest of the season has to offer and welcome any football related conversation from all of you.