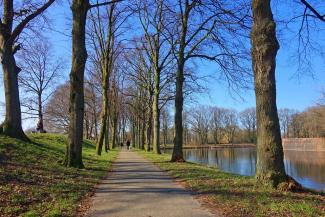 There are few things more enjoyable than a warm day in the middle of winter. That brief oasis is enough to give us Northerners hope that there is light at the end of the cold, dark tunnel that is January and February. By the time March rolls around, a respite is not only needed, it’s expected. There have been several years where I’ve played golf in March or spent St. Patrick’s Day outside. This past weekend gave us the taste of spring many of us desperately needed, and hopefully took advantage of.

In our house, not a minute was wasted. Jill took the kids to the playground and beach on Friday, and let the fresh air take its toll on their energy level. I drove home from work a little early, windows down the whole way. The air was brisk, but refreshing, and the sun was warm on my face. On Saturday, we were up and outside by 9am. People were out walking their dogs, garages were open and many were even sitting on their front porches enjoying the sunshine – it felt like the hibernation was over. After a long walk, we ran into our neighbors and our kids played together outside for hours. They loved it. The hardest part was getting them to come inside for lunch, which inevitably led to some tears.

After lunch, it was back outside. My OCD kicked in and I washed all the cars and scrubbed the garage floors. There was months of sand, salt and dirt all over the floors, it was therapeutic getting it all out of there. It took a few hours, but I honestly didn’t care. Kyle was my little ‘helper’ while Ryan napped. Some would say he did more harm than good in the cleaning department, but he had fun playing with the power washer and foam cannon I use to wash the cars. He greeted all the neighbors as they walked by and made sure I didn’t miss a spot. He had a smile on his face the whole time, which was most important.

As the sun started to set, it took the temperature gauge along with it. Mother nature was quick to remind us that we weren’t out of the woods yet. The snow covering the ground and the frigid temperatures that followed the next few days were a slap in the face, to say the least. As we march on through February, we can only hope for another sunny day to tease us. Until then, we’ll move forward as we do every year, and the smart ones will go south for a few more weeks until the days are longer and the temperatures are warmer.