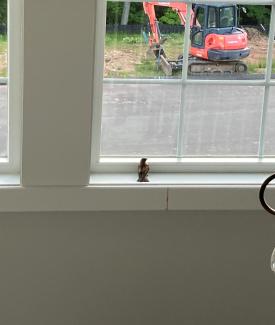 You're Not Supposed To Be In Here!

Similar to how many tropical climates only have two seasons (the rainy season and the dry season), there are two only seasons that exist inside our house: the season of air conditioning and the season of heat. The air conditioning season is from about March until December and the heat covers the rest of the year. We don’t often opt to leave our windows open for more than a couple of hours at a time (especially living in a neighborhood with lots of construction, dust and noise). By keeping our windows closed and the house clean, its rare that even a fly gets inside. Anything larger seems very unlikely. Until the other day.

I was cleaning up from dinner after making chicken on the grill and I noticed a brown splatter on our clean white cabinets. I didn’t think anything of it, wiped it off, and moved on. About a half hour later, it was bath time. Which for Kyle means splashing around for a bit in the tub, followed by some cardio as he runs all over our second floor naked. Except this time was different. I had already wrangled him into his diaper but was chasing him trying to get his PJs on when he stops and looks out towards the picture window in the foyer. He points through the chandelier and says ‘Bridie! Birdie!’ I look over and sure enough, there is a bird sitting on the ledge of the second story picture window.

I immediately go from thinking ‘how cute’ to getting very upset after I notice that the bird relieved himself all our newly painted walls and windowsills, much of which is over 15 feet in the air. He made a mess everywhere, on the walls, windows, stairs and floors (remember that brown stuff on my cabinet I mentioned earlier… yup, there, too!). Meanwhile, Kyle continues to point and yell ‘Birdie!’ and stomp his feet. He’s loving it.

I never thought I would hate cathedral ceilings as much as I did in that moment, because it made it nearly impossible to usher the bird out the door as he was perched too high for me to reach with my hands. Getting him out was going to be impossible, I thought. I also didn’t want to injure the bird while Kyle was watching because the last thing I need is for him to go telling people I’m killing animals in our house. And of course, he had to watch every second of what was going on. Even Toy Story wouldn’t distract him from the chaos in the foyer.

I started by just trying to scare him into flying out the door by throwing a soft ball in his direction. No luck there. Then I grabbed the Swiffer, stood on a chair and tried to gently nudge him off the ledge. That was a failed attempt as well. The bird would fly in a circle and smash into the window glass (making more of a mess each time). This was both sad and infuriating at the same time. Then came the towels. These were gentle enough to not hurt him but also big enough to ensure that I could make contact on each throw. It was working – he would start to fly around and eventually made it into the kitchen and out the door. The whole ordeal lasted over a half hour. I was sweating by the time it was over, and definitely enjoyed a cold drink as I assessed the damage.