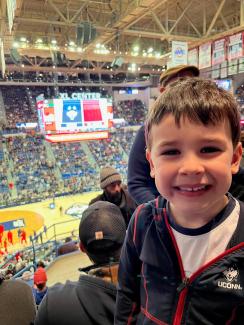 Some of my fondest memories involve sports in some capacity. Many date back to my childhood where playing organized sports was a large part of my development, not to mention the days, weeks or months I’ve spent playing basketball in the driveway or on the golf course. As a spectator, I’ve ridden the roller coaster of being a sports fan through the Yankees dynasty in the 1990s, three UCONN men’s basketball championships, two Giants super bowl wins and countless one-off memories attending and watching some of the greatest sporting moments in history. Naturally, I’ve been itching to share this with my boys, who are now old enough to enjoy watching a game on TV, playing catch in the backyard or shooting hoops on their toy basket. Kyle took a bit step this year by joining me and my brother-in-law at his first live sporting event, a key Big East basketball matchup: the UCONN/St. John’s men’s basketball game.

These plans were long in the making as I wanted to be sure that he had enough interest in watching sports to make it through a full game (now that UCONN is good again, tickets aren’t cheap!). Since the start of college basketball season back in November, I’ve made a conscious effort to have a game on at least a couple of days a week – a move that is certainly self-serving as I enjoy watching college basketball as well. I found that both kids took a quick interest in basketball, more so than other sports that typically are played at a slower pace. We’ve spent Sundays watching football, golf or formula 1, but basketball has really seemed to hold their interest better than the rest (football is a close second, however). Kyle has gone all in and is starting to figure out the game, not to mention the fact that he can likely name the top 25 teams in the NCAA at any time. Ryan, to his credit (and at only two and a half), is quick to tell you his favorite basketball team is the UCONN Huskies and always points out the iconic blue jerseys on of the New York Giants on the football field.

Needless to say, a great time was had by all at the XL center (formerly the Hartford Civic Center) – although the outcome of the game could have been better for the home crowd. Kyle was excited from the moment he woke up, and fully embraced the atmosphere of the game once we got into our seats. Minus our failed attempted to get him on the jumbotron with his eccentric dance moves during the TV time-outs, the day was a smashing success and he has already asked me when we are going to our next game together. Ryan has also reminded me that he wants to join next time, too, although I suspect that may be a tall order for such a little guy.

As Kyle and Ryan’s interest in sports grows, it continues to remind me of so many moments from my childhood – many of which were with my father. Some of my first memories were also, ironically, at the Hartford Civic Center where we watched the Celtics in some of their preseason games and it sparked a love for the sport that I still have to this day. It is my hope that Kyle remembers this game as fondly as I remember those times with my father. My dad and I been fortunate enough to see some incredible games together, and, more importantly, created some priceless memories in the process. I know this is only the beginning of something great, and its hard not to want to rush it. For now, I will take solace in the fact that this will be the first of many memories for both of us.