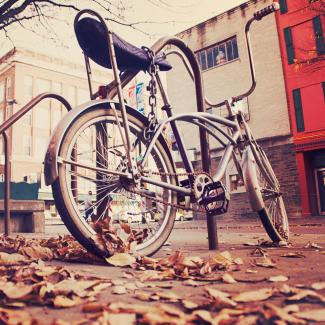 Biking Through the Ages

Riding a bicycle has always been part of my regular routine. Less so today than in my younger years, but I still have a bike that gets used on a pretty regular basis. Back in the day, a bike was a way of life. If you did not have a bike, you were left in the dust as your friends would ride off in a pack with no destination in mind. Boys, girls, it did not matter. If you had a bike you were part of the group. Remember those days?

Back in the day, the type of bike you had was of a status symbol of sorts. I was a middle child, so I usually was riding a hand me down of some sort, but I always had a bike. Whatever I was riding, I was thankful that I was riding something. The chain seemed to come off the sprockets more than I would like. As a result, greasy hands and fingers were part of my daily life. There were so many styles of bicycles over the years as well. Remember banana seats, sissy bars and baseball cards attached to the spokes with clothes pins? Then, came gears. Gears were always around but those types of bikes were scarce in my crowd. The first bike I had with gears was a red racer with high handlebars, white banana seat and a tall chrome sissy bar. There was a gear shift handle on the bar in front of the seat. Part of the thrill of shifting gears was yelling the noise of a car revving its engine while shifting gears. So silly but at the time it was the cool thing to do and I thought my bike was the hottest thing in the neighborhood.

As I got older, bike riding and what you did with your bike was an evolving process. When a bike saw its better days, it was never thrown in the trash because it was disassembled and used for parts. Scattered around the garage, there was always an odd assortment of frames, handlebars, seats, rims, peddles, chains and whatever else could be salvaged from old bikes. I remember being a little creative with an old bike frame. Using a hacksaw, I cut off the front forks off an old frame. I poured a bunch of some type of glue inside the forks and shoved them onto the forks of my bike and had an extended set of front forks. I put a smaller wheel on the front set of extended forks, and I had a full-blown wheelie machine. It looked cool and caught the attention of my friends. It was not a bike that was used for trail riding or any type of road trip. I would hang out at the end of my driveway and put on wheelie demonstrations. Of course, all good things come to an end. I was popping wheelies in front of my house one day.  When I came down, the extended forks gave away and the wheel fell off. Not a good thing. I don’t remember if I got hurt but probably had a bloody knee or elbow for sure. It was worth the pain. Ahh to be young again.

All these bike riding adventures and antics were without helmets. No one wore helmets in those days. Heck, we did not wear seat belts in the car with our parents. We shoved the seatbelts down the seat because they were in the way. Nowadays, I would not think of riding a bike without a helmet. Bike riding is no longer about looking cool and being part of the neighborhood pack. It is about getting some exercise, breathing some fresh air and seeing some sites. I bought a decent bike last year for casual riding. It has 21 speeds that are changed with a flick of the thumb, shock absorbers built into the seat and quick release tires with no tools needed to remove the tires or adjust the height of the seat. The chain never comes off the sprockets. What a difference from back in the day. No more greasy hands and searching for tools to make any adjustments. A simple snap of the clasp under the chin for the helmet to be secured on my head and off I go.

Just for the record, no more wheelies for this guy. I am more of an easy rider type these days.