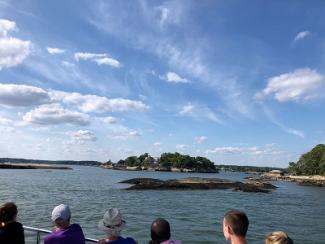 We all receive chain emails with a story about a life lesson, an incredible picture or a dirty joke. I, too, find myself reading these types of things from time-to-time and often read them with a smile before moving on. I received this one not too long ago and instead of deleting it decided to share it with you. While I can’t take credit for the words written (and don’t know who the author is to give them the credit they deserve), the message is very relevant to the dozens of conversations we’ve had in our conference room and I wanted to share it with you all. Enjoy…

Our neighbor Jim recently celebrated his 60th birthday which is a milestone in life. The last couple of summers we talked about doing the Thimble Islands Cruise that departs from the marina in the Stony Creek section of Branford. The discussions over the years about taking the cruise became a reality on Jim’s birthday this past August 12th. Jim’s wife Robin had her sister visiting from AZ with her husband. The six of us decided to meet at the docks, go for the tour and then go for pizza and beer after. Sounded like a plan to me. The 44-foot tour boat holds 49 people and is a double decker type with an open-air upper section. Cocktails and soft drinks were available on the boat and the weather was perfect. So, with sunglasses and hats we boarded the vessel and went to the upper deck and were excited about taking the tour that lasts 45 minutes.

Years earlier, Cathy and I had taken our children on the cruise and remembered how interesting it was. Also, last summer we went kayaking throughout the Thimbles and recalled how much we enjoyed seeing the natural beauty of the islands, the massive granite rock outcroppings and some of the majestic homes.

The Thimble Islands are a string of over 365 small islands in Long Island Sound, located in and around the harbor of Stony Creek in the southeast corner of Branford, CT. Only 23 islands are inhabited with less than 100 homes. The homes range from small summer cottages to magnificent mansions, complete with caretaker’s quarters, meticulously landscaped gardens, basketball and tennis courts and swimming pools. The islands are rich in history starting with their original discovery in 1614 by Adrian Block a Dutch explorer (Block Island is named after him). One of the islands is named after Captain Kidd, a famous pirate. He first sailed to the islands in 1665 and used them as a hideaway for his ship and crew. Legend has it that there is still buried treasure from Captain Kidd on one of the islands, named Money Island.

Charles Sherwood Stratton (January 4, 1838-July 15, 1883), better known by his stage name “General Tom Thumb”, was a dwarf who achieved great wealth and fame as a performer under circus pioneer P.T. Barnum. Stratton owned a specially adapted home on one of the Thimbles and spent many summers there. That island is appropriately named Tom Thumb Island.

In 1846, a local resident built a Hotel on Pot Island and eventually added bowling alleys and other activities and the islands became a summer destination for the wealthy. It was nicknamed “the Newport of CT”. Tragedy hit the islands when the 1938 hurricane devastated many of the homes and structures. The tourism aspect dwindled, and the islands became summer retreats for families that have held their properties for generations. There is a water shuttle service for the island residents from the mainland. Non-residents can use that same shuttle to visit Outer Island (great place to bring a packed lunch). For those that have never experienced the Thimble Islands, it is well worth the trip. Even if you do not do the cruise tour, just go for breakfast or lunch at either The Stony Creek Market or Thimbleberries at the docks and enjoy the view.