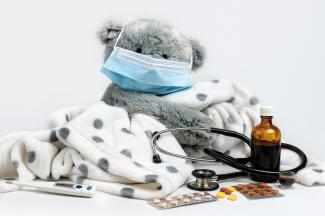 It’s no secret that just about any daycare is a petri dish that cooks up some of the nastiest colds, viruses, and bacteria that you can find in any first-world country. Even with the recent addition of masks in school, the children still have perpetual drippy noses, dry coughs, and intermittent fevers. As for the parents, well, they are just collateral damage. I’m no exception and seem to always feel worse than my children when they bring home their flu du jour. Last year, in particular, ended in a crescendo of misery which is so extensive, it is actually hard to believe.

Dating back to Halloween, the kids contracted hand foot and mouth. Having suffered from coxsackievirus as an adult, I can attest to its how cruel and unpleasant it is to have open sores in the back of your throat. My heart broke for the little guys. At least Jill and I were able to dodge that bullet. Our reprieve from illness was brief, as we soon found out that RSV had reared its ugly head in the daycare, which subsequently wiped out all three living generations of Morrones’ (ultimately turning into pneumonia for my dad) as Thanksgiving approached.

It hit home for me, and I remember it vividly, November 29th, because it was Jill’s birthday. We were decorating the house for Christmas, and I was getting worse by the minute. I begrudgingly strung the lights on the tree, put up wreathes and carried boxes up and down the stairs. All I could think about was being under a blanket on the couch and watching football. This was where the wheels started to really fall off. Things escalated quickly, and those of you that spoke with me anytime throughout December were quick to point how just how bad I sounded, even over the phone. During this time, I had not one, but two, trips aboard an airplane (hello sinus pain!), all the while COVID testing like a nut to make sure I wasn’t exposing others to my nightmare.

As Christmas approached, I needed to call in reinforcements. I enlisted the help of a trusty Z pack to kill what bacteria could be living in my sinuses and causing the perpetual discomfort I was experiencing. But it wasn’t enough. I needed heavier artillery. Just for good measure, I even visited an ENT who performed a sinus scope (who knew that was a thing) and test culture of my sinuses in search of bacteria. As if my nasal passage hadn’t been through enough, I was also regularly shoving COVID test swabs up there because it was becoming unbelievable that I had been sick for so long without actually contracting the virus. Three rounds of antibiotics, two prescription nasal sprays and a 16-day course of steroids (and a partridge in a pear tree…) was enough to finally do the trick. By mid-January, I had my mojo back. I felt energized and clear headed for the first time in months. Then we got the call.

We knew it wasn’t good when daycare was calling us at 730 at night (in the midst of a long-overdue and much needed margarita), especially seeing as our kids were safely at home. Our poor daycare coordinate had the misfortune of informing us (and many other parents) that a student in Ryan had spent the day at daycare with a child who was COVID positive. The COVID tsunami started soon thereafter, leaving no one in our house safe. All things considered, however, we survived quite well with relatively mild symptoms across the board. Fortunately, we kept it contained to the four of us and kept contact with the outside world nonexistent for several days – which meant the walls were closing in fast. Now on the other side of it, we are happy to get back to our normal routine!